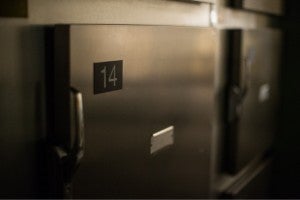 In another tweet from the set of The Amazing Spider-Man 2, director Marc Webb has shared an image with fans that appears to be refrigerated morgue drawers, focusing on a drawer with the number 14. A casting notice put out back in December 2012 asked for extras to fill out a funeral, so it's entirely possible that whoever is in this morgue drawer is the same person who will be mourned there. The other possibility, of course, is that this isn't acutally a morgue drawer but a smaller, refrigerated locker not unlike the one that stored the Venom symbiote in Ultimate Spider-Man. It actually looks to be more in line with that kind of size, although it's hard to tell from the lack o other objects to provide perspective. Given that it wasn't long ago that Sony was courting Josh Trank for a Venom movie, could that character be appearing--or at least could the concept be established--in this second film?