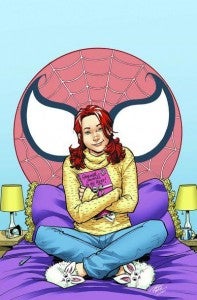 A new reports suggests that actress Shailene Woodley has already signed on the dotted line to play Mary Jane Watson in the second and third Amazing Spider-Man films, and in the story they've given quite a bit of detail of what's allegedly planned for the character and the films. Spoilers will be a few paragraphs down, but you're warned. Woodley has been rumored for the part for a couple of weeks now, but according to The Hollywood Reporter, she's already booked the job. There's a hole in her schedule at present because her TV series for ABC Family--The Secret Life of the American Teenager--was just canceled. While 12 more episodes will air starting in March on the cable network, those have already been bought and paid for--and are merely being burned off, with no hope of a further pick-up. Woodley is also in negotiations for a lead role in another film--one that apparently won't cause a scheduling conflict with The Amazing Spider-Man 2 because Mary Jane's role is not huge in the the film. According to THR, "the Mary Jane role is proving to be only a very small part in Amazing Spider-Man 2 but blossoms into an integral lead for the planned third movie as the studio seeks to build to the classic 'Death of Gwen Stacy' story." Whether that could set the stage for another trilogy--or at least more films--starring Garfield's Spider-Man and Woodley's Mary Jane is of course far too distant to imagine, although it's hard to imagine the studio would want to re-cast and reboot again so soon, and that rebooting the series and starting again with Mary Jane as an integral part of the story would likely draw unwanted comparisons to the Sam Raimi films. The Amazing Spider-Man 2 will be in theaters on May 2, 2014, just in time for Free Comic Book Day. It stars Andrew Garfield and will be directed by Marc Webb, although almost nothing else is fully confirmed yet. Even Emma Stone, who plays Spider-Man's current love interest Gwen Stacy, hasn't signed on officially for the second and third movies yet, although she's expected to.