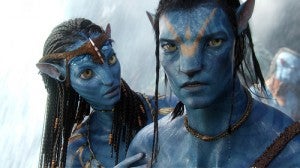 Well, earlier today we learned the day and the hour when Captain America 2 would hit from Marvel Studios. That was the good news. Now, for the bad. Producer Jon Landau is on record with Empire as saying that he's unsure when Avatar 2 will happen, but that it will not be December 2014, as previously announced, and that the epic sci-fi sequel will hit theaters in 2015 at the earliest. "We're not naming dates, but I think 2014 will be a tough date for us to make," Landau told the magazine, adding that "movies make release dates; release dates don't make movies." Landau said that challenges facing the film this time around include making a completely standalone story that doesn't feel like setup for the planned third movie as well as working around Cameron's busy schedule as a producer on other non-Avatar films. Cameron's 3D reissue of his 1997 mega-hit Titanic will hit theaters this week.