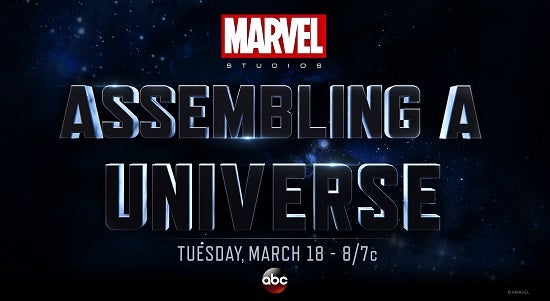 March 18's episode of Marvel's Agents of S.H.I.E.L.D. will be pre-empted by a special, airing ofMarvel Studios: Assembling a Universe, a documentary that sounds like an expanded version of the Marvel's Avengers: Assembling the Ultimate Team doc which was packaged with Marvel's The Avengers when it came out on Blu-ray last year. The special will delve into Captain America: The Winter Soldier, Guardians of the Galaxy and Agents of S.H.I.E.L.D., offering fans a look at previously-unseen footage fro the films -- and a peek at Avengers: Age of Ultron. "The special promises a "sneak peek" of an undisclosed nature from next year's The Avengers: Age of Ultron," but no additional details as to just what that might entail. Filming for the film is already underway in South Africa, and of course there was an effects test done for Comic-Con that made it online officially around the release of Iron Man 3 on Blu-ray. The docu-special promises to give viewers a "front row seat to the inception of Marvel Studios, the record-breaking films, the cultural phenomenon, and further expansion of the universe by Marvel Television." Marvel Studios: Assembling a Universe will premiere Tuesday, March 18 at 8 p.m. You can see a clip from Marvel Avengers: Assembling the Ultimate Team below.

Avengers: Age of Ultron Sneak Peek to Air on ABC