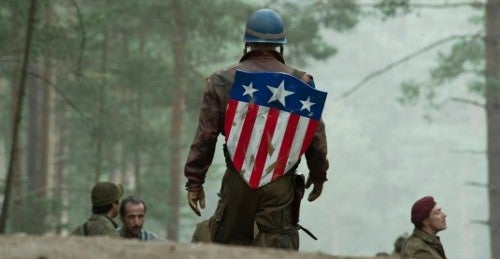 One jacket appears briefly at the start of The Winter Soldier, when former soldier Steve Rogers pays a visit to a present-day Captain America exhibition at the Smithsonian. "They were great jackets" he says enthusiastically. "I loved the fit and the look. One of them may even have come home with me." And then he mentions that he's just been measured up for another period jacket for his next Avengers film. Does that suggest the Captain will return to his past in the The Avengers: Age Of Ultron? Evans looks briefly agonised, realising that he might be confirming an unauthorised plot detail ahead of that film's 2015 release. "Maybe," he says coyly.

Of course, it could be time travel (it's the Marvel Universe); it could be time travel (much more likely) or it could just be that they need some information from somebody who knew Steve years ago (Agent Peggy Carter, perhaps) and he's helping to put them at ease by presenting himself as much as he usedt o be as he can manage. That last bit is my own piece of wild speculation but tracks with rumors circulating that Carter's character is suffering from an Alzheimers-like condition in The Winter Soldier.

Avengers: Age of Ultron to See Captain America Flash Back to the War?