After months of speculation by entertainment news websites without a peep from either Warner Bros. or the actor, entertainment monthly Empire has listed Jason Momoa as "confirmed" to play Aquaman in Batman V Superman: Dawn of Justice in its latest issue, on stands now.

It is, not unexpectedly, generating a ton of heat online tonight, but is it actually news? It seems unlikely.

When the last round of rumors swelled up from more credible websites, everyone involved seemed to stop denying the reports that Momora was Aquaman and start just plain ignoring them. That silence has led to a sense that the reports are likely true, which is probably fair. And The Hollywood Reporter, source of the most recent "confirmation" before Empire, is almost always reliable.

Print sources almost always lag behind Internet journalism, unless they're given an exclusive. The new issue, dated for September 2014, doesn't even include a look at Gal Gadot's Wonder Woman, revealed at Comic Con International: San Diego two weeks ago, because the magazine had to be prepped for the printer before that announcement was made. 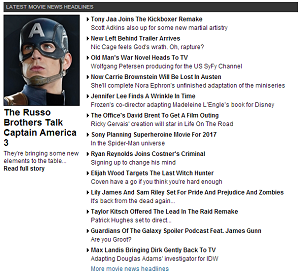 The Hollywood Reporter's story hit on July 17, though. That's probably around the time Empire was putting their new issue to bed, since we know they didn't get any of the Comic Con material. It seems just as likely that they either a) heard something similar from the source that fed THR or b) were taking the other report at face value, since it came from a reliable source and since it seemed likely at the time that Momoa would be confirmed at Comic Con.

If Empire has something more concrete on Momoa's involvement, they're not sharing it at their website (see right). That said, a number of comics and entertainment websites are picking up Empire's "confirmation" as independent of THR's and the final nail in the coffin of this news remaining "rumor." In all likelihood if they don't have their own source, they'll be forced to address the question and if they do, they'll address it for the extra traffic it will generate when they make a clarification and something a bit more definitive.

Batman V Superman: Dawn of Justice is expected in theaters May 6, 2016.