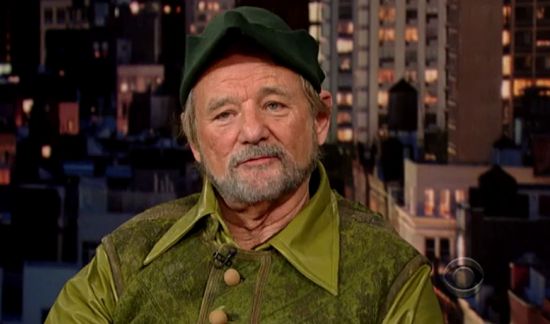 As the Internet is in an uproar over Warner Bros. latest casting announcement for Batman Vs. Superman, David Letterman reminded viewers of a Batman casting that almost happened years ago during Friday night's Late Show. Before director Tim Burton cast Michael Keaton as Batman, a long-standing Internet rumor has it that Warner Bros. once considered a Batman movie starring Bill Murray in the title role. "You know I've heard that story too," said Murray. "Really, I have. And God, I would have been an awesome Batman." Murray added, "But actually I loved…but I don't think that's true…but I thought Michael Keaton's Batman was great. I thought he was really cool as Batman. He was like one pissed guy. He was Batman alright." Letterman agreed, "I thought he was the prototypical Batman, the iconic Batman." So if Ben Affleck drops out of playing Batman, then it looks like Murray is still interested in the role. Murray also jokingly expressed his interest in the title role in Warner Bros. Peter Pan remake. After making a dramatic, flying entrance dressed as Peter Pan, Murray explained, "They're talking about restaging Peter Pan, and I think I'm the guy."

Bill Murray Says He Would Have Been An Awesome Batman