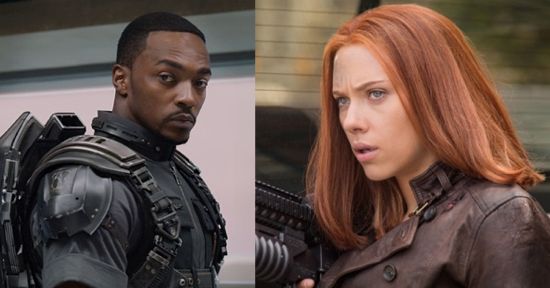 With Captain America: The Winter Soldier finally opening in U.S. theaters this weekend, Anthony Mackie appeared on the Tonight Show starring Jimmy Fallon on Friday, where he dropped some spoilers about romance in the film. While there is a scene in Captain America: The Winter Soldier where Captain America and Black Widow lock lips, it's done for rather strategic purposes. For most of the movie, Black Widow seems more interested in setting Steve Rogers up with someone else. According to Mackie, there's a hidden reason for Black Widow's lack of interest in Steve Rogers. "It's interesting, you know, there's this rapport in my character study that I came up with," said Mackie. "Because every scene, she's trying to introduce Cap to a young lady. And when I meet her…our first scene we shot together, she was like 'Hey, Falcon.' And I went, 'Oh, oh, hey Widow.' And so then, I was like, 'I get it. Black Widow and Falcon are dating. That's why she's trying to give Cap to her friends.' So if you watch the movie, and watch it real close, you'll see the love affair that we have for each other. It was intense." When Fallon accused Mackie of just trying to write a love scene into the movie with him and Scarlett Johansson, Mackie insisted, "No,no, no, no, you've got to watch the movie, man. It's intense, this entanglement of love that we had. It was deep." Check out the entire clip from the segment below. Do you think there could be anything to Mackie's theory of a love affair between The Falcon and Black Widow?