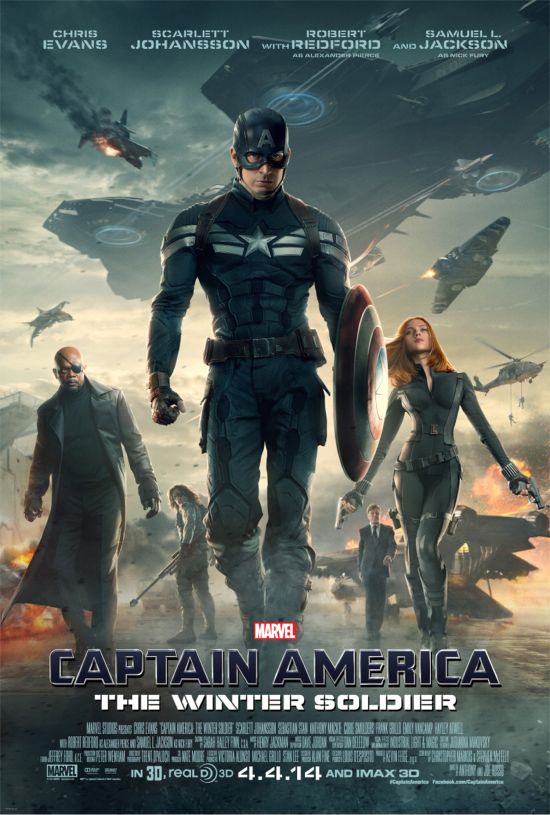 The early reviews have begun to come in for Captain America: The Winter Soldier, the latest entry into the Marvel Cinematic Universe. So far, reviews have been unanimously positive, only varying in exactly how much they praise the film. Here's a sampling: Variety says, "Evans is once again very appealing in the lead — perhaps even more so this time because the character has been given more dimensions. The aw-shucks "kid from Brooklyn" is now a man with his feet in today but his head still very much in yesterday, and Evans excels at showing us the melancholy soul beneath the gleaming Pepsodent smile. Johansson similarly brings a real wistfulness to Natasha — she, too, is dogged by her past, only where Rogers is still living in his, she'd like nothing more than to forget hers. The biggest surprise, however, is Redford, who has rarely taken supporting roles, and who plays Pierce to oily perfection. He seems to be having a blast blasting ICBM-sized holes in his well-worn persona of the unimpeachable liberal crusader." Despite featuring three Avengers in lead roles," says Digital Spy, "Captain America: The Winter Soldier feels tonally distinct from its Marvel forerunners, more spy thriller than superhero sequel. Trading in the lush period specificity of The First Avenger for a stripped-down, glossy aesthetic, it's a grounded and character-rich midpoint for Phase Two. ComingSoon.net says, "Captain America: The Winter Soldier may not be the perfect representation of the comic books, but that's actually a good thing. Instead, it gains huge points by working as a standalone movie set in the world of espionage and world politics that's different enough from previous Marvel movies to be more accessible for non-comic fans than anything Marvel's done thus far." Screen Daily says, "Captain America: The Winter Soldier may surprise out-and-out action fans with its subtle conspiracy plotting and wealth of extra background information lurking around the edges (check out Cap's notebook, or spot a quick reference to Stephen Strange aka Doctor Strange), but it is a deceptively smart film that also really delivers some seriously cool fantasy adventure." "The central conflict of this film is completely absurd," says Screen Crush, "and may have far-reaching implications for some of the other Marvel properties – but the series continues to luck out with its ace casting choices, zippy dialogue and fast action. Despite all the explosions and ridiculous technology, you still care about Steve Rogers, whose anachronistic seriousness trying dutifully to fit in to our jaded times is as apt a metaphor for remix culture as anything else. This entry won't win any new converts, but anyone already invested in this series is going to have a blast." "With a mix of effective character moments, viscerally thrilling action, humor, intrigue, and surprising heart, Captain America: The Winter Soldier is one of Marvel Studios' strongest entries to date. This one is in fact a game changer." says IGN. In Captain America: The Winter Soldier, Steve Rogers struggles to embrace his role in the modern world and battles a new threat from old history: the Soviet agent known as the Winter Soldier. Captain America: The Winter Soldier comes to theaters April 4.