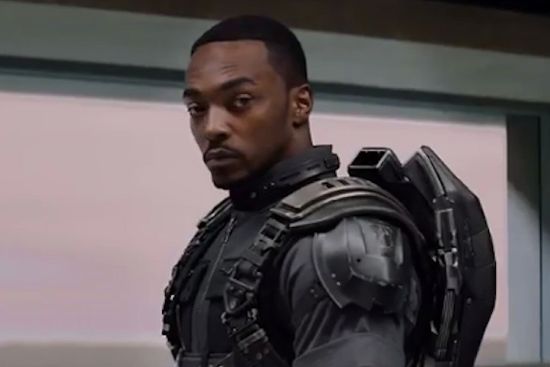 In Captain America: The Winter Soldier, Anthony Mackie plays The Falcon. In an appearance on Huffington Post Live, Mackie described being cast in the film as a "monumental moment" in his career. "When Marvel gave me the opportunity to bring this character to life, I was so emotional and overjoyed at the opportunity of being a part of not only a franchise like that, but a studio like that," said Mackie. When asked if he was a comic kid growing up, Mackie said, "No, I was a baseball kid. I was everything. I was a sports kid." Mackie added, "I was never into comic books. I was never that kid." However, Mackie has an older brother, who was into comic books, and that's who he called after he got cast. In regards to how much comic book fans know about the characters, Mackie said, "It's crazy how much they know, and if you deter from that, it's like 'Well, that's not authentic.' You know it's not real. It's made-up, so we can change it. 'No, no, that's not right. No, he's real.' Alright." When asked about the rumor of Michael B. Jordan being cast as Johnny Storm in Fantastic Four, Anthony Mackie confirmed that Jordan had the role. Mackie said, "No, no, no, he's there." "Michael B. Jordan is a very good friend of mine," said Mackie. "I've known him since he was a teenager, and I'm so happy, for more than anybody else for him to be getting the accolades he's getting, because he deserves it." In regards to people taking issue with Jordan not being the right skin color to play Human Torch, Mackie continued, "I think with these type of movies, everything else aside, you need a good actor. Michael B. Jordan is a good actor, black or white. So what you have to realize is, and go back and forth and just say, 'Superman can't fly, Batman ain't real, the Human Torch don't really set himself on fire and fly around the room, so he can look like whatever they want him to look like.' You just have to allow yourself to see him that way. And if you can't do that, that says something about you." When asked if audiences would be able to accept Jordan as Human Torch, Mackie responded, "As an audience member if you can't do that, you need to look at yourself, because there's something going on with you, that you might need some help with."