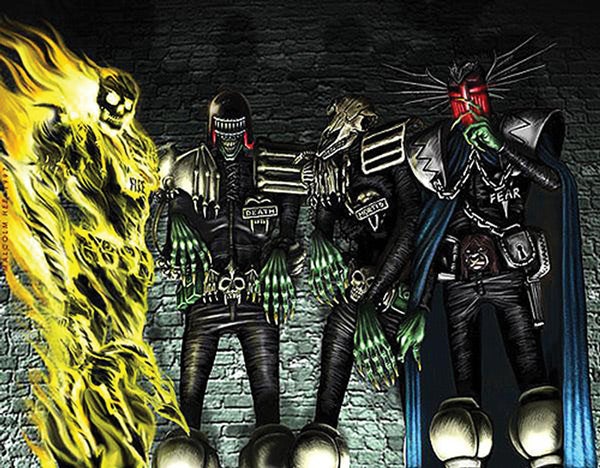 Dredd 3D producer Adi Shankar has spent the last two years secretly putting together a webseries based on the Dark Judges from the world of Judge Dredd -- and it will be available free online soon, he's told The Wrap.

It's been nearly that long since the first movie flamed out in theaters but built up a passionate fan base that has left thousands of online fans clamoring for a sequel to the Karl Urban/Olivia Thirlby film.

Shankar, who is responsible for the Thomas Jane-starring Punisher "bootleg" short "Dirty Laundry" and the Venom: Truth in Journalism short, has some built-up goodwill from the fans, and while he's been blunt about how difficult it will be to make a Dredd sequel, he'll likely win some friends with Dark Judges.

The Dark Judges are undead, recurring Judge Dredd villains, judges form an alternate dimension led by Judge Death, who believes that since all crime is committed by the living, all life is inherently criminal. They've long been rumored as follow-up villains in a prospective second or third Dredd film.

In the Batman/Judge Dredd story "Die Laughing" by John Wagner, The Joker was briefly a Dark Judge, but became bored of their mission and surrendered his role and the immortality it brought with it.

The Wrap notes that Shankar first alluded to the project in a 2013 Reddit AMA, when he described it as a short film. The project has since become a seven-part miniseries.

A special screening of Dredd 3D will take place this week at the Tribeca Cinemas as part of New York Super Week.