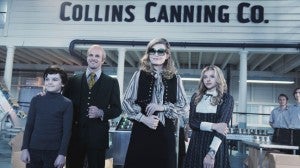 , the new Tim Burton film starring Johnny Depp, pulled in a respectable-but-unimpressive $550,000 at midnight screenings Thursday night into Friday morning, according to estimates from Box Office Mojo. That number is pretty respectable for a mid-budget movie aimed primarily at females, but isn't going to set the world on fire, particularly after The Avengers took in $18 million at its midnight screenings a week ago. The film, a remake of the late '60s-early '70s daytime soap opera, stars Depp as Barnabus Collins, a vampire whose movie comes in second to The Avengers, which is predicted to make around $100 million domestically in its second week of release.