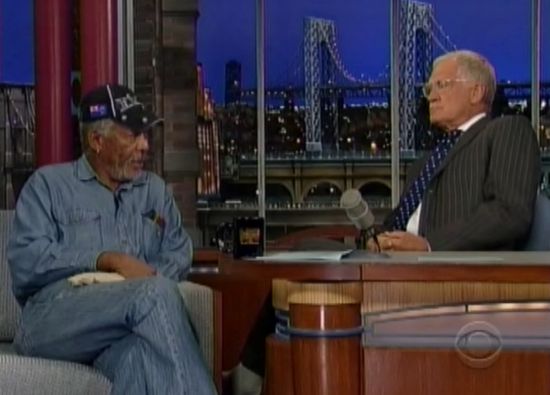 After David Letterman dropped a potential spoiler for the end of The Dark Knight Rises during an interview with Anne Hathaway last week, the Internet erupted in fury. Even though Letterman revealed the spoiler on Thursday, his Friday show was a rerun, so tonight was his first appearance since the controversy. After his opening monologue, Letterman said, "I find out that Warner Bros., the big movie people, the Warner Bros. are mad, because I announced that in the new movie Batman is dead. Everybody is steamed. They're all angry with me." Paul Shaffer asked, "What happened, you gave away the plot?" Letterman said, "I guess I did. I said Batman's dead. Didn't everybody know that Batman was dead?" Shaffer said, "No one knew, that was the big reveal." Letterman continued, "So I saw the movie, and I'm just saying maybe he's dead and maybe he ain't dead. Maybe he is, maybe he ain't, I don't know. But if you want to know why don't you spend 10 damn dollars and go find out for yourself. You see how I have to do the work for all of these people. The Warner Bros. don't know what they're talking about." In a whiney voice, Letterman said, "Oh, what do we do now. People don't know is Batman dead." Then Letterman added, "I tell you there have been five or six Batman movies, and they always pull some stunt like that. That's the kind of guy he is." Before Morgan Freeman walked out, Letterman said, "Here's a guy that will be able to tell you if Batman is dead or not. Academy Award winning actor who can be seen in the eagerly anticipated Batman film The Dark Knight Rises. Well, right there, if he's dead he's not rising." After making some small talk with Morgan Freeman, Letterman asked "Is Batman dead in the movie or not?" Freeman replied, "Dave, if I tell you, I'll have to kill you." Letterman responded, "This might be your night." After talking with Freeman about wormholes and golf, Letterman said, "Let's take a look at a clip from The Dark Knight Rises. Now, this is the last few minutes I understand where the Batman is killed." Freeman said, "You're going to get into trouble." Letterman replied, "I'm already in trouble. I saw the movie. I loved the movie by the way." The Dark Knight Rises open in theaters on Friday, July 20, 2012.