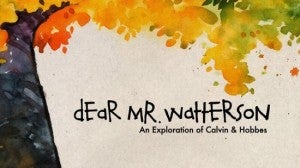 , a years-in-the-making documentary love letter to Bill Watterson's Calvin & Hobbes, will be in theaters and on VOD on November 15 from Gravitas Ventures, according to Variety. A trailer for the film, featuring a number of notable personalities from the newspaper comics and animation world, has appeared online and can be seen below. The documentary appears to be notable mostly for the fact that a number of high-profile cartoonists are in it, singing the praises of Watterson and Calvin & Hobbes along with fans and critics who have been doing so for years. Berkeley Breathed (Bloom County), Bill Amend (Foxtrot), Stephan Pastis (Pearls Before Swine) and Seth Green (Robot Chicken and Family Guy) are among those interviewed in the film, which was funded in part by Kickstarter.