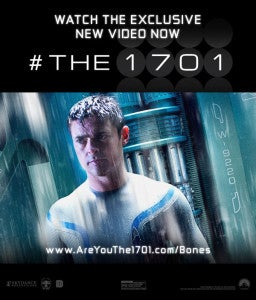 Karl Urban, who plays Bones McCoy in the J.J. Abrams-directed Star Trek franchise, told IGN that he wouldn't want to appear in Star Wars Episode VII if asked--because he wouldn't feel right about mixing the science fiction franchises. "I grew up watching it. That was the Holy Grail for me. I was a fan of Star Trek growing up. Star Wars was it," Urban told IGN. "Star Wars was like...I remember waiting for two/three years for that next installment, for Empire Strikes Back and Return of the Jedi. I've seen every single Star Wars film, even the animated, The Clone Wars, and all that sort of stuff. I just love that universe, but that being said, I have no desire to be part of it. I don't see the worlds of Star Trek and Star Wars joining. I've made a commitment to Star Trek and I'm going to keep it. It wouldn't feel right to me. Being in Star Trek, to suddenly be in Star Wars wouldn't feel right to me." When challenged about the fact that director/producer J.J. Abrams will, indeed, be taking on both franchises, Urban said there's a difference between on- and offscreen talent, in terms of how the films are perceived by the audience. "J.J. is behind the camera. There's a difference when you're putting a face and a personality in front of the camera, and I wouldn't want to do that do an audience. I, as an audience member, wouldn't want to see an actor from Star Trek in Star Wars. I just wouldn't. When I go into a Star Wars movie I want to be completely enveloped. I don't want to be taken out of the picture by going, 'Oh my God, there's Scotty, what's he doing in Star Wars?'" Urban's co-stars are divided on the question; Zoe Saldana has said that she would appear in Star Wars, while Simon Pegg said that he wouldn't, as he wants to experience it as a fan. Classic Star Trek actors Leonard Nimoy and William Shatner have both said they would take a Star Wars role if it was offered.