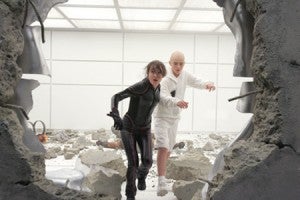 Ellen Page, one of Hollywood's hottest young leading ladies and twice a superhero (in X-Men: The Last Stand and Super), has had to contact law enforcement in California after receiving repeated death threats on Twitter, according to TMZ. The actress, who also had a small role on the Cartoon Network series The Batman, contacted the Los Angeles Police Department, who then obtained a search warrant relating to a pair of Twitter accounts that had been harassing and threatening Page. Of the two tweets quoted, one was just a death threat with no other details or information attached. The second and more recent threat (which has been removed) reportedly said, "Ellen Page if you continue to date Alexander [Skarsgard] I will K-1-L-L you in public in the next year ... Be it in a club, at a game, in a restaurant, or when you're signing autographs." The LAPD is taking the threat seriously, particularly in light of a similar, threatening phone call made the the nonprofit organization responsible for running the Los Angeles Film Festival, where Page's new film, Woody Allen's To Rome With Love, debuted back on June 14. TMZ quotes a police source as saying that the caller threatened to kill Page at the festival. The investigation is reportedly ongoing, and Page's representatives have yet to comment on the situation. Probably best known for her performance as the title character in the teen comedy Juno, Page has received critical acclaim for her more "serious" roles including a vigilante teen who pursues a sex criminal (Watchmen's Patrick Wilson) in Hard Candy and as Ariadne in The Dark Knight Rises director Christopher Nolan's award-winning Inception.