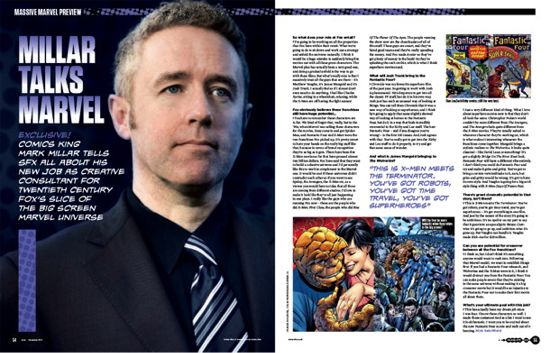 In his interview with SFX magazine, Twentieth Century Fox creative consultant Mark Millar talked extensively about the upcoming X-Men: Days Of Future Past movie. He also touched lightly on the upcoming Fantastic Four reboot from director Josh Trank. Earlier this year, Josh Trank stunned Hollywood when his debut feature film Chronicle opened number one at the box office during Super Bowl weekend. Chronicle was shot on only a $15 million budget, and the film won rave reviews for the young filmmaker. One of the rave reviews came from Mark Millar, who called Chronicle his "favorite superhero film of the past year." According to Millar, Josh Trank wants to utilize the classic Fantastic Four stories in his reboot, but also do it in his own way. Millar said, "You can tell from Chronicle that it was a new way of looking at superheroes, and I think he's going to apply that same slightly skewed way of looking at heroes to the Fantastic Four, but do it in a way that feels incredibly reverential to the Kirby and Lee stuff." Millar also added that both he and Josh Trank thought that the first 100 issues of Fantastic Four was the best Fantastic Four. Millar said, "You've really got to get into the Kirby and Lee stuff to do it properly, to try and get that same sense of wonder." Another tidbit dropped by Millar is that Fantastic Four will have its own style which will be different from the tone of other superhero movies. While not revealing exactly what that style will be, Millar said, "I don't think you could do Fantastic Four and try and make it grim and gritty."