With Halloween just around the corner, we've been getting lots of ideas from publishers and studios as to just what you should be paying attention to and/or picking up in time for the year's spookiest holiday. Here are some of our favorites...! 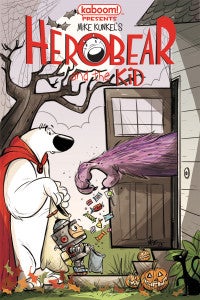 Herobear and the Kid Annual 2013 Kaboom announced last week that Mike Kunkel's beloved, Eisner Award-winning series returns with a brand-new, oversized adventure on October 30th. "I'm so excited to share this adventure with everyone," enthused Kunkel. "It's been so much fun to create a story of Herobear and Tyler that immerses into one of my favorite childhood memories: trick or treating. I also think the fun of this story is that it carries further than just one holiday—it's all about the joy of Fall." The HEROBEAR AND THE KID 2013 ANNUAL debuts in comic book shops on October 30th. The stand-alone issue retails for $3.99 with 32 pages of all-new story and art by Mike Kunkel. HEROBEAR AND THE KID 2013 ANNUAL ships with a full-color cover by Kunkel and is available for order under Diamond order code AUG131111. Adventure Time: 2013 Halloween Spooktacular Speaking of BOOM!, they've got another great book coming out soon, too: the Adventure Time 2013 Halloween Spooktacular #1.

The stand-alone issue is written and drawn by various creators and artists including Jen Bennett (ADVENTURE TIME: MARCELINE AND THE SCREAM QUEENS), Bryce Carlson (HIT), Ming Doyle (Mara), Jones Wiedle (Helvetica), Jay Hosler (Sandwalk Adventures), Jen Vaughn, and Kevin Church (The Line). ADVENTURE TIME 2013 SPOOKTACULAR ships with a main cover illustrated by Becky Dreistadt (Tiny Kitten Teeth) as well as retailer incentive variant covers by Ming Doyle and Jones Wiedle. And as an extra "treat" for fans, the special will include a yet-to-be-announced bonus story that you won't want to miss! 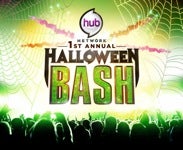 The Hub Network has a Halloween Bash planned for this year, to which fans can tune in to watch cosplayers compete for a walk-on role on R.L. Stine's Haunting Hour: The Series. The next episode of the series hits on October 19: 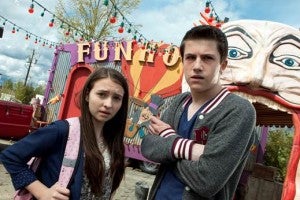 "The Funhouse" — Chad and Kelly make a promise to stick together no matter what, but their bond is tested when Chad enters a mysterious funhouse that lets him tap into his darkest desires. Meanwhile, Kelly tries to save Chad from becoming a monster trapped in his own evil thoughts, on "R.L. Stine's The Haunting Hour: The Series" Saturday, October 19 at 7:30 p.m. ET/ 4:30 p.m. PT on the Hub Network. And here's some details on the Halloween Bash: For kids of all ages, Halloween is THE night of the year to dress up as someone – or something – else.  And this year, The Hub Network, a destination for kids and their families, is celebrating costume creativity with the "Hub Network's First Annual Halloween Bash," to be broadcast on Saturday, October 26, 8–10 p.m. ET/5–7 p.m. PT. This star-studded special features a first-of-its-kind nationwide Halloween costume competition where one semi-finalist from each of the 50 States will compete to win best costume, $25,000, and a chance to appear in a walk-on role in the Daytime Emmy® Award-winning series "R.L. Stine's The Haunting Hour: The Series." The contest will be judged by Halloween expert Martha Stewart, actor Hal Sparks and actress, singer and dancer CoCo Jones. Kenan Thompson ("Saturday Night Live") is hosting the event; pop-music star Cody Simpson will be one of the musical performers; and celebrity presenters include: Bailee Madison, Rico Rodriguez, Keean Johnson, and Todd Newton, among others to be announced. Sneak a few pieces of fun-sized candy, gather some basic arts supplies and that TV remote, and host a viewing party for the "Hub Network's First Annual Halloween Bash."  If viewers need some inspiration and are not sure where to get started on creating a costume, following are some tips garnered from the Martha Stewart's Halloween, which is on stands now, and from www.MarthaStewart.com:

This TV movie based on the graphic novel by Joshua Williamson (Scream, Masks & Mobsters, The Dark Knight Rises Prelude) is a fun mash-up of Halloween and Christmas, a la Tim Burton's The Nightmare Before Christmas. It debuted last year on Cartoon Network, followed by an exclusive DVD release at Wal-Mart, but now is available at other retailers (including inexpensively at the cash wrap in many Target stores) and will be heading to home video in the U.K. in time for Halloween. Marvel Zombies Villain Minimates As we reported yesterday, Marvel Zombies are coming back to the Minimates in a big way--starting in time for the Halloween Comicfest event that Diamond Comics Distributors is putting on at select retailers around the country. Go grab 'em up!

Five Halloween Entertainment Ideas From the World of Comics and Animation