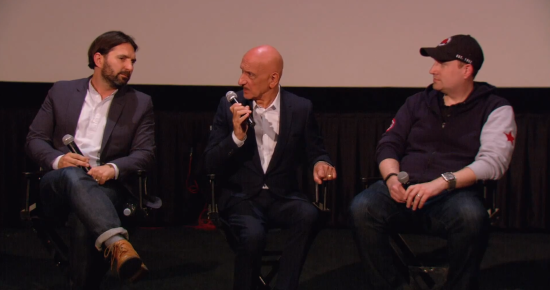 Marvel Studios has released some footage from the All Hail the King fan event held earlier this week in celebration of the new Marvel One-Shot's release. The event gave fans a chance to watch the entire short film and ask questions of Writer/Director Drew Pearce, star Ben Kingsley, and Producer (and head of Marvel Studios) Kevin Feige. The short follows Trevor Slattery, Kingley's character from Iron Man 3, who has become famous following his role as The Mandarin. A filmmaker is so intrigued that he is making a documentary about Slattery's life. Kingsley, again, reiterated how fond he is of the Trevor Slattery character. "I miss Trevor," said Kingsley. "I actually worry about him." All Hail the King is available now as a special feature on the Thor: The Dark World Blu-ray.

Footage From Marvel's All Hail The King Fan Event