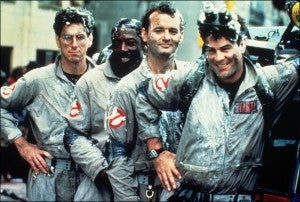 According to actor and filmmaker Dan Aykroyd, there will be a Ghostbusters 3--but his co-star Bill Murray, long seen as the lone holdout standing between the cast and a third film, will not be involved. Previous reports had been that a Ghostbusters 3 was off the table without Murray, but over the last year or so, as a couple of drafts have reportedly been delivered and then rejected by Murray, the other stars have been softening on that position. "It's sad" that Murray won't be part of the production, says Aykroyd, "but we're passing it on to a new generation. Ghostbusters 3 can be a successful movie without Bill. My preference would be to have him involved but at this point he doesn't seem to be coming and we have to move on. It's time to make the third one." Asked in an interview with Metro whether the film will ever really be made, the comedian responded, "Yes, we've got a brilliant new writer on it and we'll be passing the torch on to a new generation. We're working on it to make it just right to satisfy our fans. I'm confident we'll be in production in the next year."