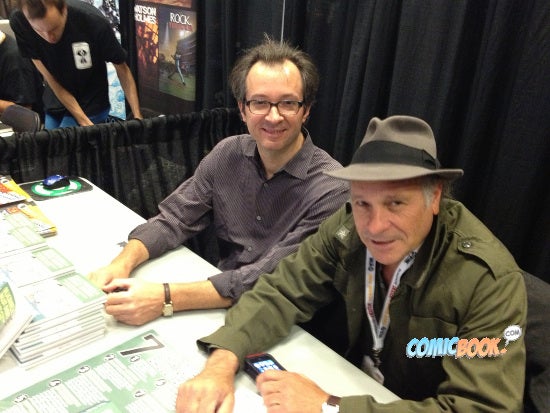 While investigative journalist Greg Palast's latest book Billionaires and Ballot Bandits--which featured a comics interlude in the middle by Palast and award-winning political cartoonist and graphic novelist Ted Rall--may find its way onto film soon, it appears as though elements of the comic--or at least his partnership with Rall--have already done so. [Full disclosure: ComicBook.com Senior Staff Writer Russ Burlingame served as an editor on some of Palast's projects, including Billionaires and Ballot Bandits] Palast just released the trailer for Vultures and Vote Rustlers, an hour-long documentary about the lingering effects of the 2008 economic meltdown on the U.S. economic and political culture. You can see it below--and it starts with about 20 seconds of animation based on what's clearly Rall's illustrations. Palast, who made a name for himself shortly after the 2000 election when he was the first to discover irregularities in the way the Florida Secretary of State's office had handled voter registration and verification, more recently made headlines during the 2012 election when he revealed back channels by which members of Congress including then-Presidential candidate Mitt Romney had reaped a direct, financial windfall from the auto industry bailout for which they had voted. In addition to Billionaires and Ballot Bandits, Palast previously created a graphic voter guide, co-written with Robert F. Kennedy, Jr. and illustrated by Rall, Lukas Ketner and Lloyd Dangle. An ad in the back of his 2012 book Vultures' Picnic advertised a comic book of the same name coming, teased with an image by Transmetropolitan artist Darick Robertson, but  that project has yet to launch.

BBC's gonzo investigative reporter Greg Palast busts the billionaires and ballot bandits who would pick our next President--in his new 1-hour film on DVD (or download): Vultures and Vote Rustlers. (Get it at www.GregPalast.com) The no-BS reports for BBC and Democracy Now--undercover, under arrest, under the skin of the ultra-rich. "Great fun" (New Yorker). "Courageous reporting" (Michael Moore). From underneath the Deepwater Horizon to the bogus ballot boxes of Ohio, in disguise and in hot water, Palast and his detective crew will make you laugh as hard as you scream in anger. Download it or get the DVD from the not-for-profit Palast Investigative Fund. www.GregPalast.com Katherine Harris says, "Palast is twisted and maniacal" -- so let's twist again with Palast.