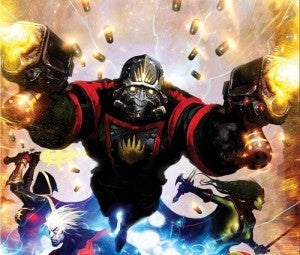 Filming hasn't yet begun, and as far as anyone knows the movie hasn't even been cast, but Variety is reporting that the rumored film adaptation of Marvel Comics' Guardians of the Galaxy will be released on May 16, 2014. It's widely expected that Marvel Studios will announce the film at Comic-Con International in two weeks, perhaps along with a status update on Edgar Wright's Ant Man feature film. The Guardians of the Galaxy script--which was singled out as being great in a report earlier this week from Latino Review--was reportedly written by Disney's own Nicole Perlman, a young writer who came up through the studio's screenwriting program. While some fans are skeptical that a movie based on a comic with so little audience awareness could work, the Variety story points out that Marvel and Disney would serve themselves well in getting films like The Inhumans and Black Panther in progress while the buzz from The Avengers is still running high in Hollywood. Creating new franchises based on other Marvel-owned characters is probably cheaper in the long run that continuing to pay the original five Avengers an ever-increasing rate based on the success of their films, and avoids the "cancel or reboot?" trap if one or more of those franchises starts to feel stale. Guardians of the Galaxy in particular is being singled out as the film that could kick off the Marvel Cosmic Universe in the movies and open the studio up to a different audience than typical, New York-based superhero films. Look for more news out of San Diego Comic-Con July 11-15.

Guardians of the Galaxy Already Has a Release Date?