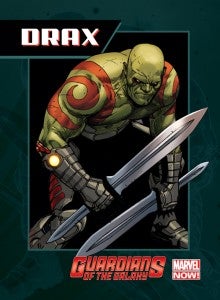 Reports that Jason Momoa as Drax the Destroyer in Guardians of the Galaxy was basically a done deal have turned out to be somewhat exaggerated. Latino Review's El Mayimbe, the same source who originally claimed that Momoa was all but signed to play the role (and was immediately contradicted by other reports), now claims that the actor is asking for too much money, and that Marvel Studios is looking at other candidates to fill the coveted role. Over the course of three tweets made earlier tonight, El Mayimbe said: "Marvel is back to screen testing actors for Drax. Somebody needs to remind Momoa that nobody saw his last 2 films & take Marvel's offer. For an agency that gets made fun of alot, APA is playing a dangerous game with Marvel. They need to lower their client's expectations a tad. Momoa is a dope actor & I think he would crush the role of Drax. Hope it all works out." Since filming on the movie begins in June, the studio has some time (but not a ton) to get their cast list finalized. The announcement of Chris Pratt as Star-Lord (the film's lead) has mostly quieted the furious rumor mill that surrounded that character's casting, but it won't be long before people start to wonder who might play Drax and Gamora, the other two humanoid members of the Guardians team.

Guardians of the Galaxy Reportedly Back to Casting For Drax