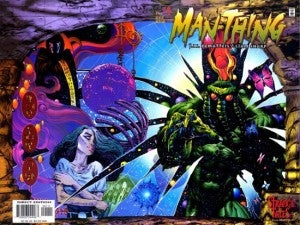 Earlier today, Comicbook.com was first to officially reveal who Stephanie Szostak will be playing in Iron Man 3. While there has been lots of speculation and even sources claiming that Stephanie Szostak will be playing either Janet van Dyne or Bethany Cabe, Stephanie Szostak's actual role is that of Ellen Brandt. Ever since we revealed this information, we've gotten two questions. Who is Ellen Brandt? How do you know for sure Stephanie Szostak is playing Ellen Brandt? Well, we were buying into the Janet van Dyne rumors early on, but the reason we now know Stephanie Szostak plays Ellen Brandt is because Marvel told us via their official website. Once we saw it in writing on Marvel's website it all made sense, and here's five reasons why. 5. Ellen Brandt Is An Agent of A.I.M. –A.I.M. stands for Advanced Idea Mechanics and is an organized group of international science-terrorists. It's been confirmed that A.I.M. will play a role in Iron Man 3 by an official Marvel photo that shows Tony Stark wearing an A.I.M. shirt. 4. Ellen Brandt Is From Florida – Ellen Brandt is from Citrusville, Florida in the Florida Everglades. Iron Man 3 filmed several scenes in Florida, and it has been confirmed that part of Iron Man 3 is set in Florida. 3. Ellen Brandt Was Tied To A Super-Soldier Serum Project –Ellen Brandt's husband was a S.H.I.E.L.D. scientist that was working on a 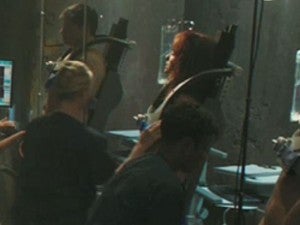 research program aimed at recreating the lost "Super-Soldier Serum" that had originally created Captain America. Iron Man 3 revolves around Extremis, which is also described as a super-soldier solution. As previously pointed out on Comicbook.com, Stephanie Szostak is shown in the second Iron Man 3 theatrical trailer being constrained in one of the metal harnesses shown in the lab. 2. Ellen Brandt Is Connected To Man-Thing – Speaking of Ellen Brandt's husband (sometimes referred to as her fiancé), Ellen Brandt was married to Ted Sallis, who eventually became the Man-Thing. Does this mean Man-Thing is going to be in Iron Man 3? Probably not, but it sure lays the groundwork for Marvel Studios to include Man-Thing in a future movie in some way. 1. Ellen Brandt Is Connected To Doctor Strange – In one comic book storyline, Ellen Brandt encountered Ted Sallis after he became Man-Thing, and she stood in front of him to protect him when sheriff's officers opened fire on him. However, she was saved by Doctor Strange. Doctor Strange also recruited Ellen to help the Man-Thing restore the Nexus of Reality. Does Doctor Strange appear in Iron Man 3? Probably not, but Kevin Feige has confirmed that Doctor Strange is part of Marvel Studios Phase Three plans. Maybe Ellen Brandt and Man-Thing could tie into an eventual Doctor Strange movie, which makes the whole universe tie together nicely. 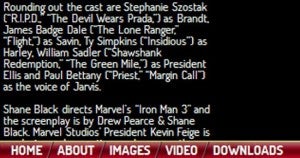 Now, back to the proof that Stephanie Szostak plays Ellen Brandt. Earlier, we posted a screen capture of the production notes from Marvel's official Iron Man 3 website. Many of you have written to say that when you go to the Iron Man 3 website the production notes have been removed. Well, here's a hint. Try visiting the mobile version of the official Iron Man 3 website. The production notes are still up there, listing Stepanie Szostak as playing Brandt. While Marvel doesn't' list the first name of Stephanie Szostak's character, a quick internet search will reveal that Ellen Brandt is the only Marvel Comics character with the last name Brandt that would fit into Iron Man 3. Now, maybe Marvel is putting the name up there to throw off fans, but if so why would they have removed it from their main site (and probably overlooked removing from their mobile site). Plus, all the other information in the production notes look accurate, so it would be surprising for them to put in one piece of fake information.