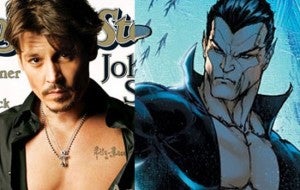 It's hard to believe that Johnny Depp turns 50 years old today. It's even harder to believe that the popular actor has never starred in a big budget superhero movie. With Depp's propensity for playing quirky characters, one would think Johnny Depp and comic book superheroes would be a match made in heaven. Johnny Depp was born on June 9, 1963 in Owensboro, Kentucky. His first big break came when he landed a role in the eighties television series 21 Jump Street. He made the leap to the big screen thanks to some help from Batman director Tim Burton, who cast Depp in the lead role in Edward Scissorhands. Throughout the years, Johnny Depp has been linked to a number of superhero movie roles, most famously at one time it was rumored that he was going to play The Ridder in Christopher Nolan's third Batman film. Johnny Depp has also often been linked to the role of Dr. Strange, but usually just as part of wishful fan casting. None of the various rumors have ever materialized to be true, and Depp has yet to be cast as either a supervillain or a superhero in a comic book movie. However, Depp does have at least one comic book movie role to his credit. He played Inspector Frederick Abberline in From Hell, which was based on an Alan Moore graphic novel. Johnny Depp has also professed to reading comic books as a kid and even had a favorite character. Depp told Hero Complex, " I liked Sgt. Rock. And I loved the Sub-Mariner. I loved Prince Namor, the Sub-Mariner." Are there any comic book movie roles that you would like to see Johnny Depp cast in? Check out a previous list we did of the top five comic book characters that Johnny Depp should play.