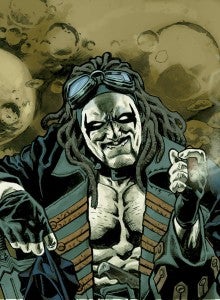 A movie based on DC Comics' intergalactic bounty hunter Lobo is moving forward with Journey 2: The Mysterious Island director Brad Peyton at the helm, Deadline is reporting. Created by Keith Giffen with writer Roger Slifer during their 1980s run on Omega Men, Lobo has been alternately a villain, an antihero and even occasionally a fairly straight hero over the last twenty-five years or so, including a brief period in the 1990s during which he was one of the most popular characters in comics. Known for his over-the-top violence (often played for comedic effect), Lobo has often had trouble finding a niche in the DC Universe, which attempts on the main to be fairly family-friendly. Still, he's being reintroduced in Rob Liefeld's current Deathstroke run, in which the pair--earth's most notorious assassin and the galaxy's most feared bounty hunter--are squaring off. Prior to the New 52, Lobo had been in and out of circulation for a while, but had a featured role in the crossover megaseries 52 and subsequent appearances in R.E.B.E.L.S. and Brightest Day. No date has yet been set for the tentative film, which will be produced by Joel Silver and Akiva Goldsman. A previous attempt to make this film by the same directors hit a snag when they lost director Guy Ritchie, who opted to make Sherlock Holmes: A Game of Shadows instead. As seen here on Easter, a student filmmaker made a short film based on The Lobo Paramilitary Christmas Special a few years back. Enjoy that below, and keep your eyes on ComicBook.com to find out when the big-budget version gets off the ground.

Lobo Movie Gets a Director