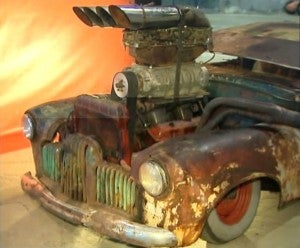 , the long-awaited reboot of the Mel Gibson-starring hits from decades past, will no longer be shot in 3D, according to Screen Crave. Instead, the film will be shot in 2D and converted to 3D in post-production. George Miller, the director of the original films, will return to direct the movie, which stars Tom Hardy (Bane from The Dark Knight Rises) and Charlize Theron. It was the director's call to change the strategy; the movie began filming in Nambia recently and was expected to receive a shipment of new, 3D cameras soon but Miller reportedly opted out. The project has been plagued with delays from the start, with the script taking longer than expected and shooting beginning only recently despite Miller's having told fans a couple of years ago to expect the movie "in 2011 or 2012." No solid release date has been selected yet.

Mad Max: Fury Road to Be Shot in 2D After All