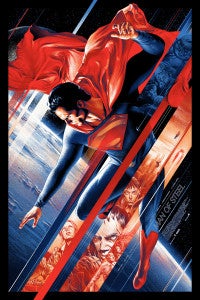 This is one of those records so esoteric that it took a comments thread on an unrelated story for us to even notice it--but Man of Steel has become the highest-grossing superhero reboot of all time, according to box office estimates that place its current domestic cume at $263 million. That's a million more than The Amazing Spider-Man made during its theatrical run last year, and the film had already passed by The Incredible Hulk, Superman Returns and Batman Begins earlier in its run. The film has done well at the box office in spite of negative reviews and is currently the highest-grossing non-sequel based on a DC property (the only DC movies that have done better were The Dark Knight and The Dark Knight Rises). Still, it's currently #10 all time on the list of comic book adaptations and it's unlikely it will rise any higher. There are seven Marvel properties (The Avengers, three Sam Raimi Spider-Man films and three Iron Man films) above it besides the Batman films, and the closest--Iron Man 2--has about $50 million more than Man of Steel.