Mark Staufer is the creator of The Numinous Place, a multimedia mystery novel that features interactive film, audio and "other media" aspects like the ability on th epart of the reader to see complete news stories set in the book's universe and offering clues and insights into the larger story at play. He's also a schoolmate of leading man (and Superman's dad) Russell Crowe, who has lent the considerable cache of his name to promotional materials that boast his backing of the project's Kickstarter page, which wraps its funding window next week. Drawing from a wide variety of influences, the names of which it invokes on the project's website to give fans and potential backers a sense for what the offbeat, insanely ambitious project is actually like, The Numinous Place is described on its website as the natural evolution of books, something that integrates the technology already available to readers who are reading them on their iPads and laptops to make the experience a deeper and richer one than either a book or a standalone film/video project can provide (notoriously, books get to tell a deeper story than movies because movies are restricted by runtime and budget. On the other hand, movies allow the viewer to interact with the characters in an immediate, visceral way that doesn't come easily to the printed page). The result, from what we can see online so far, is a fascinating and complex multimedia novel that arguably shares more DNA with video games than with the traditional novel. Staufer joined ComicBook.com to talk about putting the work together, what it means to him to work on a project so dramatically different from anything else he's done, and where to go from The Numinous Place. What I noticed right off about the press release is the sheer number of references it drops as touchstones for the audience. It compares your work to everything from The Da Vinci Code to The Matrix to Myst. Do you worry about inundating potential backers with that imagery and leaving them worried that the work is a bit scattered? I guess what we're trying to get across is that The Numinous Place is something new in terms of entertainment, and it's difficult to compare to just one medium. It has the historic conspiracy/cosmic detective elements of the DaVinci Code book, the creepy sci-fi feeling of The Matrix movie and the immersive first-person attributes of Myst the game. In the end it's an adventure-world created by merging all types of story-telling techniques - video, audio, images, narrative - and therefore feels incredibly realistic. With something of this kind of scope and magnitude, I always have to ask: what happens if this doesn't get funded through Kickstarter? It seems too far along to just slam on the brakes, doesn't it? For creatives and inventors Kickstarter is a most liberating and powerful tool. I decided to go this way after potential investors wanted too much equity in my project. At the end of the day, it's all about getting the word out to as many people as possible and driving traffic to the Kickstarter page. We have a few days left, and I'm not even considering failure as an option.I'm stubborn that way, especially when it's taken me 10 years to create this thing. 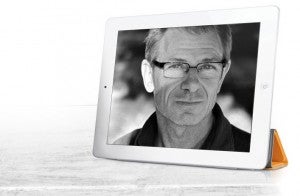 It's interesting that the interactive, "video game-inspired" aspects of the work are actually something we're seeing quite a bit in children's ebooks. On my Nook Tablet, I can download any number of things aimed at my two-year-old and do things like move the puzzle pieces around, provoke reactions from the characters and the scenery. What do you think it is that's holding this up from being a standard for all ages? Yeah, kids are well represented when it comes to amazing ebooks, and when you see a four year-old on an iPad you realize why. It's like second nature to them. Adult ebooks are another thing entirely. In effect, words have just moved from the page to the screen and this is due to a number of factors. It's a complex, time-consuming, and potentially expensive process creating something like The Numinous Place. My process started a decade ago and because of my background in radio, television, print and movies, I was able to imagine and then create the storyworld in this way. In effect, I'm a one man band, and I've brought in others to realize elements that I have no experience with. Comic book artist Larry Soileau, for instance, because I can't draw to save my life. And actors, obviously, to play the various roles. What's the difference, in terms of time and effort and energy, in writing something like this versus writing a book or a screenplay? Outside of the layout time, how much extra would you say you had to put into crafting the news reports and the ancillary documents and all that? When I began writing, I had no idea The Numinous Place would end up being this epic multimedia adventure. But as I began work, I realized utilizing all these different media was the most realistic method of telling the story. When your aim is "no suspension of disbelief required" including elements like TV news reports, a diary entry, or a phone conversation really ramps up the realism. It's like presenting actual evidence to the reader. Because of my background experience with all these media, it became second nature to compose The Numinous Place this way. It was a challenge at first, because I was creating something new and there were no rules or guidelines, but I think it's incredibly effective. Do you think (other than screenwriting, which is a bit of a different gig, really) that you can go back from this? After an undertaking on this scale, what do you think are the odds that you'll ever be able to just write a book and not think, "You know what I could do with this...?"? Funny you should say that. I've still gotta pay the rent and I was taking a meeting the other day with a production company about a new movie project, and I gotta say I was thinking about it in terms of The Numinous Place template. It is hard to go back from this because it is so immersive and consuming. I have three more books in the Numinous Place series, and then a kids' book planned using the same technique. Was this whole project a matter of starting from the idea that you wanted to evolve the book and then moving into what kind of story would suit that, or did the story come first and you said along the way that you thought you could add more? Everything starts with the story, or should do. For me this whole thing started with the idea, what would it be like if they developed the technology to film dreams? Part of telling the story the way I have was because I knew I really wanted to show video of those dreams in the book. It wasn't going to be good enough to just describe them. The visceral impact had to come from the actual video of people's dreams, and then ultimately - because lucid dreaming is used to travel to the afterlife - show film of the afterlife. So the second thought after the film dreams one was, what would happen if science proved absolutely the existence of the afterlife?