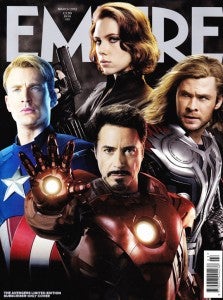 The Avengers have taken over the cover of Empire Magazine this month, and while the images on the cover and interior photos don't provide much we haven't already seen (save a quiet moment between Hawkeye and Black Widow), and (as pointed out by MTV's Splash Page) the absence of action sequences seems determined to hide the ultimate threat the Avengers will band together to face--but producer Kevin Fiege does rule out a few popular Internet rumors. Asked whether the film's central antagonists would be aliens, or beings from the Nine Realms as described in last year's Thor film, Fiege told Empire, "It's not Skrulls, I've been clear about that. Beyond that, we want to hide it. The identity of the alien race is not impactful. It exists in the comic books, but we're not setting up the Kree-Skrull war or anything like that." While many fans will likely not believe the denial given what's perceived to be a mountain of circumstantial evidence supporting the Skrulls as the villains, it'll be interesting to see whether his quote--it's not the Skrulls, and it's not setting up the Kree-Skrull War--will launch a round of speculation surrounding the Kree. Certainly introducing Mar-Vell to the Marvel movie universe could have its benefits, and some fans have speculated that the next logical direction for Marvel's films to branch out into is cosmic Marvel, which would make Mar-Vell or Quasar a logical enough character to add to the team by the end of the film. Another theory seemingly rebuffed by Fiege is that the Red Skull will appear in the film. While the producer acknowledges that Skull's apparent death at the end of Captain America: the First Avenger is likely not permanent, he adds that "It would be fun to see Skull in future, but he's not in this one." Seeing a film that prominently features the Cosmic Cube but has no Red Skull will be an interesting twist on Marvel's mythology, where Captain America's arch-nemesis has consistently been the driving force between almost every major story featuring the artifact.

Marvel's Kevin Fiege Says No Skull, No Skrulls In THE AVENGERS