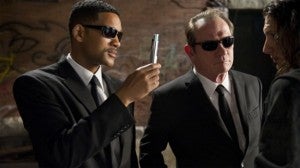 The Men in Black are back...in time. That's gist of a new 30-second TV spot that really spotlights Will Smith, as well as Josh Brolin doing his best Tommy Lee Jones impression--and his best impression is darn good. It's the first TV spot for Men in Black 3, which stars all three men and hits theaters on May 25. Because we've got a handful of major releases between now and then, notably The Avengers, which they announced today will have early screenings for Facebook fans as soon as April 14, don't expect the hype machine for this one to kick into high gear just yet. The impressive TV spot, coupled with a cool trailer last time around, has us looking forward to this film, which seemed at the time of its announcement like something that absolutely nobody was asking for. As far as comic book adaptations go, it can't be any worse than Ghost Rider 2, can it? Check out the trailer below and let us know--what do you think of Men in Black 3?