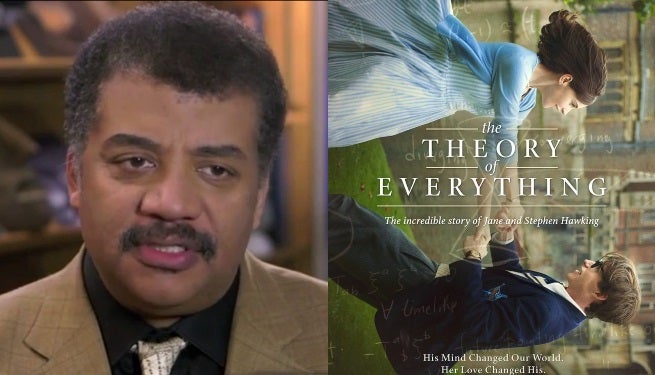 In a new featurette released by Focus Features, Neil deGrasse Tyson talks about Stephen Hawking's contributions to the field of science. He particularly singles out Hawking's discovery of what is now known as "Hawking Radiation," and refers to Hawking as a "badass."

Tyson also comments on the heroic portrayal of scientists in recent works of popular culture, include The Theory of Everything, Focus Features' Hawking biopic. The film has been nominated for multiple Golden Globes and is also an Oscar contender.

"I'm enchanted by the fact that, of late, science, as a topic, and scientists, as characters, have peaked the interest of storytellers," Tyson says.

Starring Eddie Redmayne ("Les Misérables") and Felicity Jones ("The Amazing Spider-Man 2"), this is the extraordinary story of one of the world's greatest living minds, the renowned astrophysicist Stephen Hawking, who falls deeply in love with fellow Cambridge student Jane Wilde. Once a healthy, active young man, Hawking received an earth-shattering diagnosis at 21 years of age. With Jane fighting tirelessly by his side, Stephen embarks on his most ambitious scientific work, studying the very thing he now has precious little of – time. Together, they defy impossible odds, breaking new ground in medicine and science, and achieving more than they could ever have dreamed. The film is based on the memoir "Travelling to Infinity: My Life with Stephen," by Jane Hawking, and is directed by Academy Award winner James Marsh ("Man on Wire").