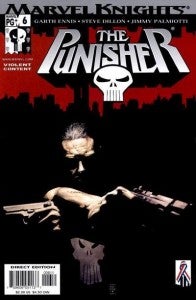 The Punisher, whose next attempt at motion picture glory will be guest-appearing in the upcoming Iron Man/Hulk cartoon, is currently starring in Do Not Fall in New York City, a seven-and-a-half minute short film that adapts one of the most popular single issues of the Garth Ennis/Steve Dillon run on The Punisher. The story revolved around a friend of Frank Castle's from his days in the Viet Nam war, who murders his family and ends up in Punisher's sights. It was a critically-acclaimed and fan-favorite episode, which set up easy parallels between The Punisher (whose family was taken from him) and those he stalks. Check it out below--the art itself is far from perfect, but for those of us who have watched each subsequent Punisher film with a mounting frustration that they don't just do a truer adaptation, it's a welcome attempt to do just that.