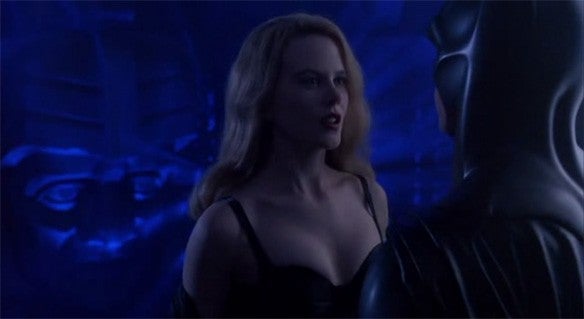 Nicole Kidman is ready to take on her next superhero film.

Sure, it's been almost twenty years since her role as Dr. Chase Meridian in Batman Forever, but should the actor get a chance to enter another comic book world, she wouldn't pass it down. Speaking with Yahoo! Movies about her Batman Forever experience, in which she played the Dark Knight's love interest, Kidman revealed that she felt envious of co-star Val Kilmer's meatier role as Bruce Wayne/Batman.

"I remember going, 'I wish had more of a role, though," she told Yahoo. "It's great being the girl in the Batman movie…But I'm an actor and you go, 'Gosh I want more to do."

Though 47 years old, the actor could have plenty of comic book options. With the current state of training regimens and visual effects technology, she could easily get into fighting shape as a super heroine. Just look at Robert Robert Downey Jr. At 49, he's Hollywood's favorite super hero actor and has at least two more films with Iron Man.

Which superhero would you like to see Kidman tackle? Let us know in the comments.

Nicole Kidman Wants To Do Another Super Hero Movie