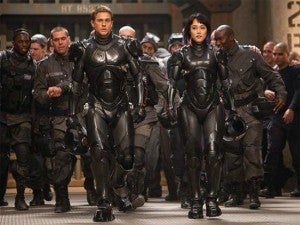 An early screenings of Pacific Rim was held yesterday, and attendees have taken to Twitter to share their thoughts. The early buzz on Pacific Rim appears to be that the film lives up to the hype, which should be very good news for Warner Bros. since they've gotten off to a slow start this year. Here are a sampling of some of the spoiler-free reviews via Twitter. Robert Meyer Burnett has shared several comments on Pacific Rim, all extremely positive. Here are a couple of his best tweets about the film. "So. I just saw the nearly-finished PACIFIC RIM. I know I'm prone to hyperbolic statements...but believe me...PACIFIC RIM is STUNNING." "If you wonder where your inner child went? Well...go see PACIFIC RIM in the biggest theater you can find and experience the resurrection." "The extended 'Battle of Hong Kong' sequence is the greatest sustained sci-fi action sequence in cinema history." "#PACIFICRIM is the most satisifying summer movie IN DECADES. It delivers EVERYTHING...and I mean EVERYTHING you could possibly want to see." "For this lifelong Kaiju and Super Robot fan... #PACIFICRIM was seeing my childhood imagination exploding in front of my eyes for two hours." "PACIFIC RIM is, after all, a movie about GIANT ROBOTS fighting GIANT MONSTERS. Within that paradigm, it's sheer perfection." "If I haven't been clear, my very highest recommendation for #PACIFICRIM, a perfectly realized, mind-blowing Sci-Fi Kaiji Fantasy Adventure." Of course, that's all from just one person, but what did others think of the movie? Deric A. Hughes tweeted, "This movie is so hype, that me trying to hype it anymore is just doing it a disservice. It doesn't need it." He also tweeted, "Sad part is, once you see it, you'll want to see it again. And again. Until you come to realize it'll NEVER be enough." And he tweeted, "Seriously, big screen cinema drug. You are physically dizzy and exhausted from excitement when it's all over." Derek Housman tweeted, "Just saw Pacific Rim. Thank You Guillermo Del Toro, thank you." He also tweeted, "I've been walking around in a daze for the last thirty minutes." AJ Aquino tweeted, "Screened #PacificRim it's everything you hoped for and more. Also got to meet Guillermo del Toro as well. What a class act. #Blockbuster" Pacific Rim is set to open in movie theater in the United States on July 12, 2012.