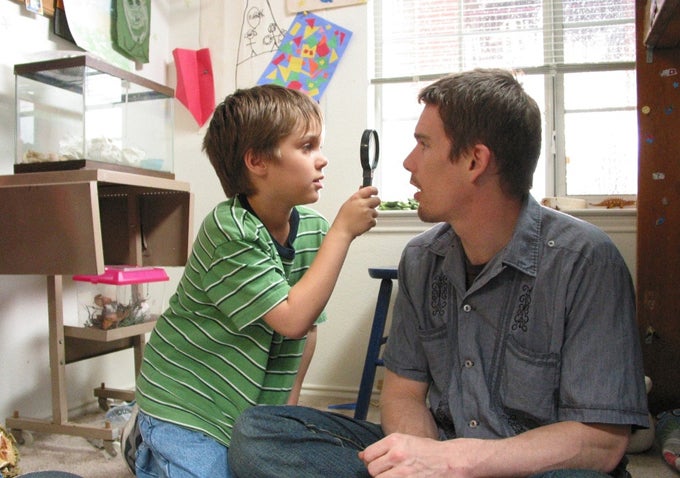 Ed. note: Richard Linklater's most recent film, Boyhood, isn't necessarily the sort of movie we would usually look at, but it's a fascinating concept and the filmmaker behind is is one that we've said in the past ought to be tapped for a Marvel superhero franchise. Star Ethan Hawke, of course, has done genre fare before including the cult-hit Gattaca and the Linklater-directed Waking Life and A Scanner Darkly.

It is nearly impossible to review Boyhood without mentioning the element which differentiates it from every other movie ever made.

Boyhood was filmed over the course of twelve years in order to allow the cast to age with their characters. While it could have felt very gimmicky and cheesy, the aging was shown so subtly that sometimes, it was only possible to tell that another year had passed due to the ever changing haircuts. At times, it is even hard to believe that scenes were filmed years ago; they're so on the nose. (A reference to the possibility of Star Wars sequels garnered quite a bit of laughter.)

Beyond the gimmick however, is a sweet film about a young boy growing up. When the movie starts, young siblings Mason and Samantha are sharing a bedroom in a small house where they live with their Mother while their Father has been in Alaska for a year and a half. Over the years, the children deals with multiple moves, good and not-so-good step-parents, new schools, making and losing friends, first romances, and all the traditional rights of growing up.

It is fascinating to watch Ellar Coltrane and Lorelei Linklater (Mason and Samantha) both age from children to teenagers rather than two or three different actors each portraying them at different stages. Both young actors were seven when filming began and eighteen when it was completed. (Despite being only three months older in real life, Linklater's character is two years older than Coltrane's.) Equally fascinating is watching their parents, played by Patricia Arquette and Ethan Hawke, also age physically as well as emotionally.

Ellar Coltrane spent twelve years working on his breakout role, and it was well worth the wait. His performance as Mason is realistic and nuanced. You really believe you are watching a young boy grow up, because in a way, you are. As their Mother and Father, Arquette and Hawke are both strong; though their characters are somewhat stereotypical. Linklater gives a good performance as a young girl, but her enthusiasm clearly wanes in the later years. (Rumor has it that she wanted her character to be killed off at one point so she could quit.) Director Richard Linklater (her father) adapts the character to her so the occasional apathy in her performance does not stand out too strongly.

When so many films are filled with special effects and life or death situations, it is almost an adjustment to watch a movie that shows simple slices of everyday life. There were times when audience members cringed or tensed up, wondering if something terrible was about to happen. But Boyhood gives us an honest look at life, the good and the bad. It is a well-made and interesting film, and it is worth looking past the gimmick to see it for the story it tells.

Richard Linklater's Boyhood Is Worth Looking Past the Gimmick