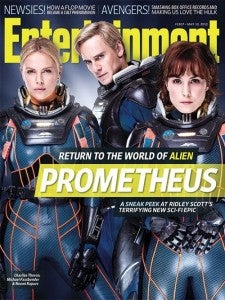 There has been lots of speculation that Prometheus is a prequel to the original Alien movie. In perhaps his most revealing interview yet, director Ridely Scott talks about the connection in this week's issue of Entertainment Weekly. When EW directly asked Scott if Prometheus was a prequel to Alien, he refused to directly answer the question, but the interviewer noted he grinned. However, Scott is quoted as saying, "There may be a vague notion, some slight DNA from the original Alien." Scott continued, "But barely. Fans of the original Alien will notice some things, especially toward the end of Prometheus. Like, 12 minutes from the end. But I really can't say more than that." That Scott would point to a very specific time point in the movie seems to strongly indicate there is something to the speculation. EW even notes that during their interview, Scott repeatedly slipped up and even referred to Prometheus as Alien. In the same article, Michael Fassbender is much more direct in answering the question. Fassbender is quoted a saying, "There's definitely a link to Alien. There are creatures in it that you'll recognize, but that's only one tiny facet of what's going on."