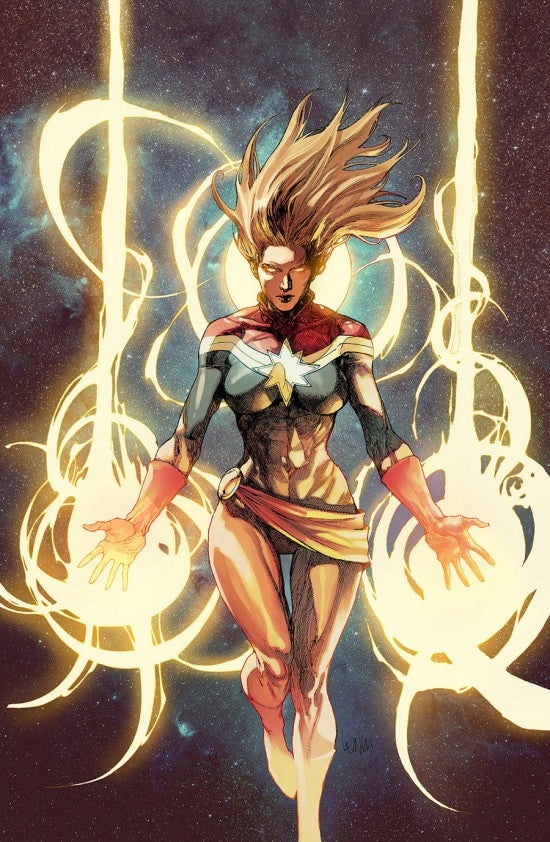 Rumors that Katee Sackhoff was interested in playing Carol "Captain Marvel" Danvers will likely get a goose online again this week, after her name was listed in a Latino Review report claiming that the character--going by her "Miss Marvel" name--will appear in the forthcoming Avengers: Age of Ultron. To be very clear, they did not claim that Sackhoff was taking on the role, or even the frontrunner, simply that she's the only one who's been discussed online with any seriousness and that they understand the character is the last major piece of casting for the much-anticipated sequel. Sackhoff later downplayed the rumors, saying, "People love a good story, even if it's a story that has very little truth to it. If you go back and actually listen to what I said, I said that people have checked my availability. I never said Marvel [or] Disney so it's interesting how people twist stories to serve an agenda that makes people click on their site, or sell their papers. I absolutely have not spoken to Marvel. It doesn't mean that my team hasn't spoken to Marvel. I personally have not spoken to Marvel and have no plans to do a movie in the immediate future, because number one I'm tied up with Somnia which is a fantastic place to be. It's exactly where I wanted to be." Latino Review attached the Miss Marvel rumor--they stressed "Yes, Miss Marvel"--to the news that Paul Bettany will apparently get an upgrade, with the actor playing The Vision in Age of Ultron. That rumor, though, didn't start at LR and instead came from the Daily Mail. It seems a strange move for Marvel to go with "Miss Marvel" when they've successfully rebranded Carol in the comics with a name that feels less Silver Age-y and vaguely sexist, and when they've done so much to ensure that the "Captain Marvel" trademark be stripped from DC's Shazam family.