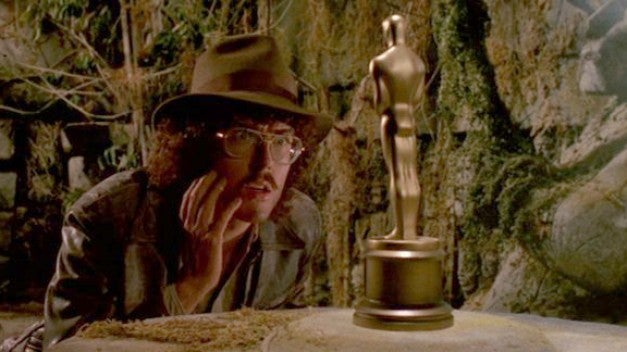 UHF, which debuted in cinemas on July 21, 1989, was not a financial success during its theatrical run, but turned into a home-video smash. The film was an absurd send-up of all things '80s, including early MTV, Indiana Jones and Rambo.

Announced at the (still-ongoing) Shout! Factory panel at Comic Con International: San Diego, the UHF Blu-ray will be joined by a box set of additional material titled The Compleate Al.

You can see the complete and official announcement below. So far, Shout! Factory isn't totally sure what new special features may be added or how much of the most recent, feature-rich DVD set will be carried over to the new printing.

"Weird Al" Yankovic and Jay Levey bring you the cult classic that turns bad television into fantastic cinema! When consummate daydreamer George Newman becomes the manager of Channel 62, a station that's losing money as quickly as it's losing viewers, he begins to program the station with off-the-wall shows like "Stanley Spadowski's Clubhouse," "Wheel of Fish" and "Raul's Wild Kingdom." But can Channel 62's new popularity save it from cancellation? To find out, don't touch that dial!

THE COMPLEAT AL is the amazing, hilarious, and almost-true "life story" of "Weird Al" Yankovic, the Grammy award-winning master of musical parody and rock and roll comedy. THE COMPLEAT AL takes you behind the scenes, beginning with his early and somewhat formative childhood years; his high school and college days, up through his present-day bout with super-stardom. This concocted chronicle also contains some of the funniest moments from "AL-TV," footage from his recent trip to Japan, and reveals for the first time the incredible story behind "Eat It."