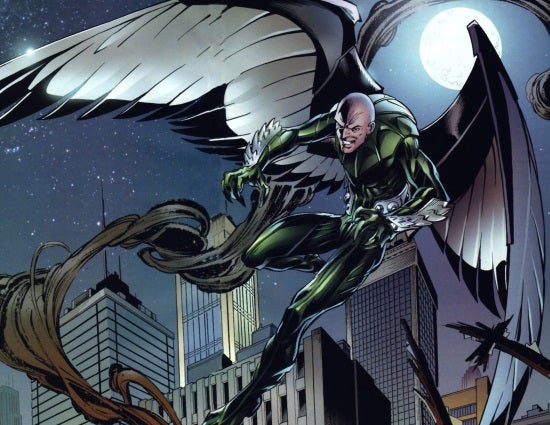 At the German premiere of The Amazing Spider-Man 2 in Berlin, co-producer Matt Tolmach hinted at another potential member of the movie version of the Sinister Six, and also hinted at a potential gender swap for the character. German website Moviepilot posed the question of potentially gender swapping a character to Tolmarch. "It's certainly possible," said Tolmach. "It's a good idea actually." Moviepilot suggested that a female version of the Vulture might be an interesting thing to see. Tolmach seemed to agree. "Could be very cool," he said. "I'm not going to commit to anything other than to say, 'a really good idea.' And it could certainly happen. So, we'll see." The vulture, male or female, is already being teased in The Amazing Spider-Man 2 with some wings on the wall inside Oscorp. As to whether or not the character will be a member of the Sinister Six, we'll have to wait and see. We'll also have to wait and see if there's anything to this gender swapping idea, but it wouldn't be unreasonable to assume that the studio might want to diversify the all-male lineup of the Sinister Six, and Tolmach has already said that, when it comes to the Sinister Six, nothing is sacred. Sinister Six will be directed by Drew Goddard. The villainous team is being teased in The Amazing Spider-Man 2, coming to theaters May 2.