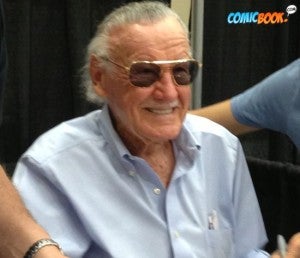 At Fandomfest in Louisville, Kentucky, Comicbook.com was there covering the event live. Over the weekend we posted some quotes from Stan Lee addressing two movie related questions: one about why he didn't have a cameo in The Wolverine and one about Andrew Garfield's comments on making Spider-Man bisexual. Guess which story every one on the Internet is picking up on today? There are a whole host of sites reporting on Stan Lee's reaction to the suggestion of Spider-Man being bisexual, most of them which we're pretty sure were nowhere near Louisville this weekend. Thanks to the ones that credited us for the original report. In his response to the Spider-Man question, Stan Lee said, "He's becoming bisexual? Really? Who have you been talking to? I don't know…seriously I don't know anything about that. And if it's true, I'm going to make a couple of phone calls. I figure one sex is enough for anybody." We posted video with our original article to make sure that Stan Lee's tone was clear, to show that there no hatred or bigotry at all in his voice. He was joking around with the audience like he did with most of his answers. In fact, Stan Lee made his views on bigotry of any type pretty clear in another answer he gave to a different question at the same Fandomfest. When asked if the fact that X-Men hosts a variety of diverse characters was intentional and if he considered himself a social advocate, Stan Lee at first joked, "If you think it's good, I did it intentional." Then, Stan Lee got more serious and explained, "I wanted them to be diverse. The whole underlying principle of the X-Men was to try to be an anti-bigotry story to show there's good in every person." The audience gave Stan Lee a huge round of applause.