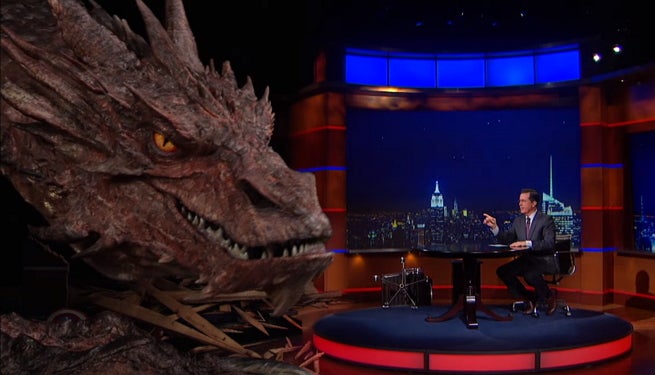 Stephen Colbert is finishing out his nine-year run on The Colbert Report strong, with some incredible guests showing up for the show's last two weeks

On Monday, Colbert hosted President Barack Obama, who actually took a turn behind Colbert's desk to host his own version of the host's popular "The Word" segment, retitled "The Decree."

However, Colbert may have topped even that with last night's show, when he interview Smaug the Magnificent, the tyrannical dragon from The Hobbit.

Over the course of the interview, Smaug, who is voiced by Benedict Cumberbatch in The Hobbit films, discusses liberal bias in Hollywood, how he can't stand the "Khaleesi-whipped" dragons from Game of Thrones, and how he turned down a role on Sherlock because he couldn't imagine playing second fiddle to Cumberbatch the way Martin Freeman does.

Colbert is a known Middle-earth superfan, and even had a cameo in The Hobbit: The Desolation of Smaug, so one imagines this interview had to be a favorite for him.

The Hobbit trilogy concludes with The Hobbit: The Battle of the Five Armies, opening in theaters December 17.