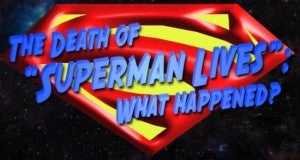 Back in January, Comicbook.com reported on a Kickstarter campaign by Director/Producer Jon Schnepp to raise money to do a documentary about exactly why the Superman Lives movie never got made. Superman Lives was a movie announced in the nineties that was going to star Nicolas Cage and be directed by Tim Burton, but it never materialized. At the time, the Kickstarter campaign had just launched, so not much money had been raised. However, the campaign has now raised over $77,000. In order for the documentary to actually be made, the campaign needs to raise another $21,000 or so in the next 14 days. Just recently, Director/Producer Jon Schnepp posted an update with some really cool news. If the goal is reached, Schnepp has already confirmed that he will be interviewing Superman Lives screenplay writer Wesley Strick and current Superman writer Grant Morrison. If the project hits its stretch goal of $148,000, Jon Schnepp said that Bear McCreary is interested in doing the musical score.