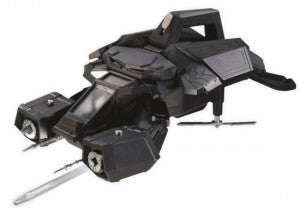 If you haven't seen The Dark Knight Rises yet, then you're probably on the wrong site, because most comic book fans have seen it by now. However, just in case, we're including the obligatory spoiler warning, so look away now if you by some far chance have not seen the film (and still intend to do so). A new toy has been revealed that might help to shine some light on a scene that has been creating much confusion and controversy among Dark Knight Rises viewers. At the end of The Dark Knight Rises, Batman carries a nuclear bomb away from Gotham City with The Bat. We see Batman flying away from the city in the Bat, and the mushroom cloud far away from the city after the bomb explodes. Initially, we're led to believe that there was no autopilot on The Bat and that Batman perished in the blast. However, it is then revealed that The Bat really did have autopilot, and Alfred spots Bruce Wayne with Selina Kyle at a café. Most took these final scenes to indicate that Bruce Wayne/Batman survived the blast, but some have wondered if the café sequence could have been just an imaginary dream by Alfred. After all, how could Batman get out of The Bat in time to get far enough away to survive the nuclear explosion? Most theories about Batman's escape revolve around some type of escape pod, but there have still been questions of if he dived into the water and swam back to Gotham City. The Bat toy appears to offer the definitive answer. The Bat toy comes with a Batman figure equipped with glider wings and an eject button that can launch Batman for 9 feet. The answer to the how Batman escaped the blast appears to be that he ejected from The Bat and glided back to Gotham City. 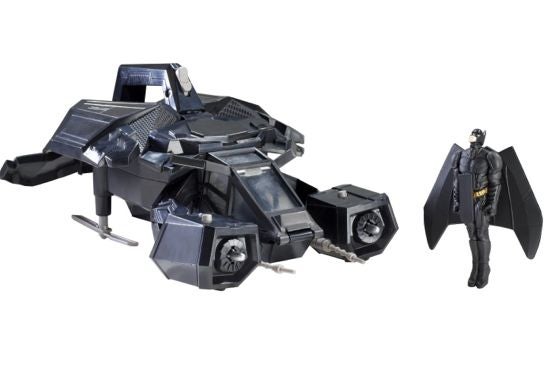 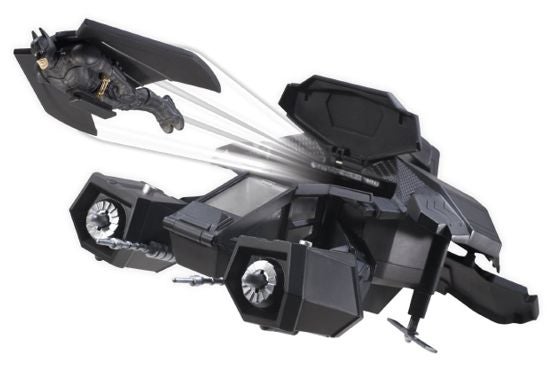