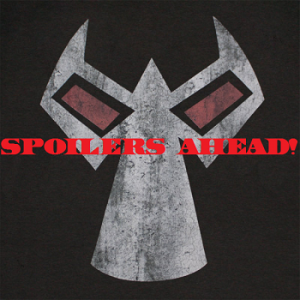 In the run-up to today's release of The Dark Knight Rises, director Christopher Nolan's third and final installment in his trilogy of Batman films that began with 2005's Batman Begins, much of the film was shrouded in secrecy. Characters were imagined to be hiding under cover names to hide their true nature, theories abounded as to how much of the story would be adapted from the comics, and much more. While we already posted a non-spoiler review of the film so that fans who haven't yet seen the movie can read up, this time around we're going to be a little more in-depth and specific, allowing for a little different analysis of the film. The Dark Knight Rises is absolutely chock full of connections to Batman Begins and The Dark Knight, many of which play a pretty large role in the character and plot development of the series' finale. It's an effective storytelling tool, used well, and it helps to bring the films together as parts of a larger whole. We get numerous flashbacks to previous films, including recycling footage featuring Thomas and Martha Wayne, and Harvey Dent as Two-Face. They're used to set up moments in this film--usually in super-brief bursts, which might be an artistic choice or a practical one given the film's long runtime. Oh, yeah, that runtime? Frankly, this film could have been split up into two movies and probably presented less of an issue for the uninitiated viewer. The revelation that Bane is the son of Ra's al Ghul may have been a surprise to comic book readers, but the sudden way it's turned around and revealed to be a falsehood perpetrated by Talia is downright confusing if you're watching the movie in a vacuum. Granted, the concept in itself isn't that hard to wrap your head around, but when you're perceiving it in the broader context of the film, it makes you have to stop and consider the implications for the rest of the movie, wondering what aspects of Bane's backstory you can trust, and which of them may not work at all if others aren't true. Given the fact that the whole revelation comes in the middle of an action sequence and the filmmaker moves on in a matter of moments, it doesn't give the viewer a lot of time to digest it. It's as though the big reveal at the end of The Usual Suspects was dropped on your head without Singer's stylized flash through the movie to explain it. We get a bit of that in The Dark Knight Rises, but it's quick and shallow and not particularly instructive given the scope of the reveal. I found myself accepting the premise easily but wondering for the rest of the movie, "Well, if that's true, then how does this beat from earlier in the movie work?...And this one?".

The recurring theme of a villain who's bent on instilling fear also comes back here. Scarecrow used chemicals to instill fear, while Joker used the random unpredictability of an anarchist who might strike anyone at anytime. Bane uses sheer force to instill terror in the populace of Gotham, taking the city over by coup and forcing the city to live under martial law in constant fear of death. A number of fans on message boards and the like have had a hard time determining the difference between an nihilist like The Joker and a terrorist like Bane, but in this film, it's pretty obvious from the word go, beginning with the attack on the CIA plane. That's really the kind of planning that's arguably out of Joker's league. That they have no Batman to protect them is almost an afterthought; he'd been gone for so long at the beginning of the film, and so vilified, that it's entirely possible the presence of the vigilante would have just made things worse. Can we talk for a minute about the politics of Batman? While Bruce Wayne seems to be a limp-wristed liberal, eager to give handouts to orphans and poor folk, both the Wayne Foundation and Batman are pretty conservative. The Dent Act, a thinly-veiled version of the real-life USA PATRIOT Act, is celebrated early in the film at a fundraiser held at Wayne Manor and funded by the Wayne Foundation via Miranda/Talia. It's an obvious extension of his behavior in The Dark Knight, but still seems worth mentioning, given the Limbaugh controversy that's been ongoing all week long, where the conservative talk show host quoted reports implying that the film was secretly a piece of liberal propaganda. There's a through-line in this movie about the truth of the written word. The letter from Rachel Dawes that appeared in The Dark Knight makes a resurgence here, and while it's obviously not physically there (Alfred burned it), it plays a major role in determining the course of Bruce and Alfred's relationship. At the same time, the relationship between Jim Gordon and John Blake is queered somewhat by Gordon's resignation letter, written for "someday" and kept on his person until it fell into Bane's hands, which confesses to the way they covered up the truth about Harvey Dent. We also get plenty of looks at newspapers that never seem to tell the whole story, particularly when they're talking about Bruce Wayne's sudden poverty.

Bruce, of course, comes out alright in the end and it's pretty predictable how. In the first act of the film, Michael Caine's Alfred has a heart-wrenching (and Good Will Hunting-inspired) scene that sees him eventually leave Wayne Manor--but not before vocalizing to Bruce what his idea of a perfect "happy ending" for the Batman would be. That ending, of course, is given to Alfred as a gift at the end of the film, along with Selina's version of a happily-ever-after that's not directly stated but pretty clearly implied throughout the movie. What does Bruce want for himself? It's unclear. The fact that he got something resembling a happy ending, and that he seems alright with it, works really well but it really seems like he exists in service of those around him. He's never actually able to step completely away from Batman, something that runs from the beginning of the film (while Bruce was inactive, the Batcave was not) to the end (he gets his happily-ever-after, but saves a spot for Robin/Blake to keep the Bat's seat warm). Catwoman's arc is a masterwork; it isn't until the movie is over and you can see the full picture, with all of the moving parts including Talia and Daggett, that you can really appreciate it. Talia threw the party that allowed Selina to gain access to the Manor, meaning that even that very basic thing--the opportunity for entry--was part of the larger plan. Robin Blake, meanwhile, gets a great arc, even if it kicks off unconvincingly; I never really bought that Tim Drake was able to see Dick Grayson on the news for a half-second and figure out that Dick was Robin and therefore that Bruce was Batman. Blake gets something similar, with his "I see the body language of an orphan in Batman" thing. Still, the idea of the wide-eyed idealist who loses his faith in the system but retains his faith in justice sets him up perfectly to take the reins from Bruce, who has a very similar arc in the first film. "Victory has defeated you," Bane tells Batman at one point early in the film, pointing out the way that Bruce had allowed himself to fall apart after Batman was no longer needed. It's a very Rocky III moment, and that's something that's been discussed at some length online. Of course, there's also an element of Rocky IV, with Bruce being forced to retrain himself using nothing but basically dirt and stone. Everything in the film plays a larger role--even "The Star-Spangled Banner," seen in the earliest trailers for the film, has a double meaning in this movie. It's a song about an icon that stands for hope, bringing confidence to its people even during the darkest and most violent days of war. And that's The Dark Knight Rises in a nutshell.