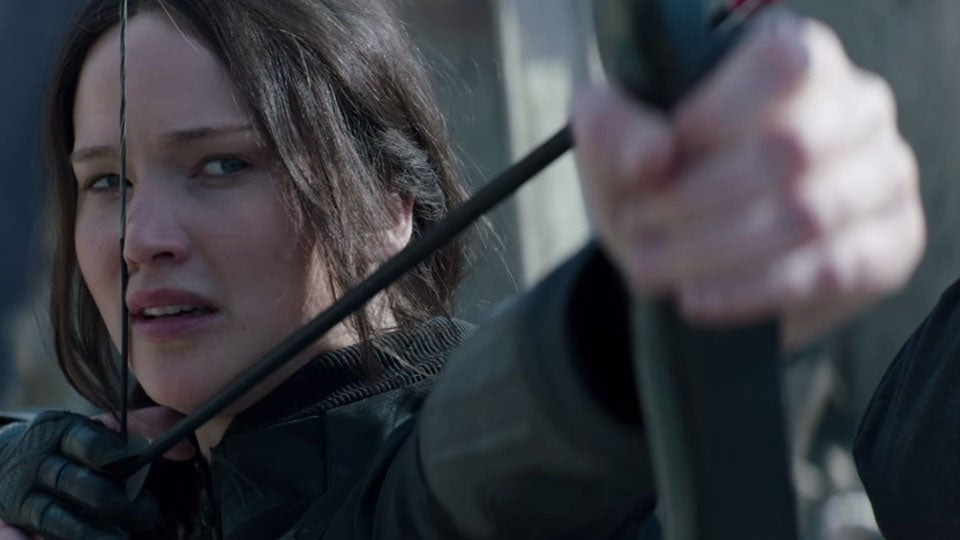 The Hunger Games: Mockingjay Part One marks the beginning of the end for the popular series as it opens in theaters this weekend. Its positioning as the first half of a final installment works simultaneously as a strength and weakness. The film builds upon the scope of both The Hunger Games and Catching Fire to make it the most sweeping portion of the series, but it is ultimately the weaker half of a broader story and is permanently set beneath the shadow of what it is setting up.

The movie opens shortly after the conclusion of Catching Fire. Katniss Everdeen (Jennifer Lawrence) now finds herself underground in District 13 as they prepare for war with the Capitol. Over the course of the film, leaders of the rebellion, along with her friends and allies, push her towards becoming a symbol to unite the districts in their fight. Various romantic and political sub-plots are woven concisely into the story as well. Mockingjay Part One continues a trend in which the films improve upon their source material. There is a natural flow to the events of the movie, transforming Suzanne Collins' weakest book into a far more coherent and thematically interesting narrative.

Director Francis Lawrence focuses on the use of propaganda and the horrors of war in this installment. The battles have expanded beyond a carefully designed arena and now threaten the lives of every person living in Panem. The Hunger Games began as a dark series (it's hard to get darker than children forced into murdering one other), but has progressed to even more mature material as it has continued. The obvious antagonistic relationships with the Capitol and career tributes in the first film have given way to much more ambiguous conflicts. District 13 represents a challenger to the tyranny of the Capitol, but they not without impurity. Propaganda and total war are strategies for both sides and Lawrence is not timid in allowing the actions of the rebellion to be shown without implicit approval. Midway through the film the bombing of a hospital is brought about by a reckless choice to send high value targets there in order to create propaganda. There is blood on the hands of both sides of this war.

This exploration of war is provided through Katniss' eyes as the symbol behind which soldiers and rebels are uniting. She is a small piece of a much larger strategy, which allows her to maintain a moral core while still engaging with the problems presented to those leading the fight. Her transformation into an icon throughout the first half of the film is fascinating. Lawrence is interested in how a political message is crafted and instills the costuming, coaching, and filming of Katniss with a palpable sense of excitement. The process in which she becomes the Mockingjay is made to be almost as thrilling as the battles in which she fights.

It's important that this dialogue-heavy portion of the film works well because it consumes most of the running time. There are very few action sequences in Mockingjay Part One in comparison to the first two films. Only two action-oriented set pieces stand out and both occur in the second half of the running time. They are better shot than anything from earlier installments, discarding the excessive use of dutch angles, but are still only brief glimmers into a war that audiences are primarily told about instead of shown.

With so little action, the film's momentum is largely reliant on its cast and they do not disappoint. Casting director Debra Zane should be applauded for her work on this series. The returning cast members continue to provide excellent performances, while new additions like Natalie Dormer as Cressida and Elden Henson as Pollux do outstanding work even when given relatively little camera time (and in Henson's case, not a single line of dialogue).

The most invigorating members of this cast are the heavyweights who compose the political elite on both sides of the war. Donald Sutherland as President Snow, Julianne Moore as President Coin, and the late Philip Seymour Hoffman as Plutarch Heavensbee all transform political stratagem into captivating drama. Hoffman's performance reveals why he will be so dearly missed. Even in a blockbuster engagement, he is unwilling to give anything less than his best efforts. Subtle smiles and facial tics help build the portrait of a man who engages with the world as a master gamesman, even when striving for a noble goal. His thought process can always be found written across his face and within his body language. In Hoffman's hands, Heavensbee is transformed into one of the most interesting characters in the film.

Even Josh Hutcherson as Peeta, whose performance was lackluster in earlier films, undergoes a striking transformation here. His commitment to the role, along with excellent makeup, shifts Peeta's role from that of an unengaging village boy to a striking portrait of inhumane treatment and abuse. At the end of the film he is completely changed in a terrifying manner.

Peeta's transformation reflects that of the story itself. Beginning in the underground confines of District 13, it slowly expands to reveal the state of Panem and the progression of the war. One of Lawrence's greatest achievements here is the world building completed throughout the course of two hours. Following Katniss' journey, he creates momentum for the war and shapes the nature of the conflict. Mockingjay Part One reflects the title of Catching Fire far better than its predecessor. Events build throughout the course of two hours leading to the inevitable conflict between the Capitol and the districts, and then the screen goes black.

That is precisely the moment in which the greatest flaw of Mockingjay Part One makes itself known. It is not a problem with the casting or the direction of the film, but something built into its very structure. This movie is only the first half of a story and its conclusion is merely a chapter break. Separating the final installment into two films has created a structural flaw in the first half that is deeply troublesome, although not quite ruinous. Fair warning: I will be discussing the end of this film, so skip the next two paragraphs if you do not want to read any significant spoilers.

The movie concludes with Katniss staring at Peeta who has been transformed into a raving madman designed to kill her, while President Coin announces the beginning of an assault on the Capitol. It is treated like a significant cliffhanger, but there's nothing climactic about it. Coin's speech is a natural progression of the events of the film; it is neither shocking nor dramatic. Peeta's state of mind, while certainly saddening, does not radically alter the status quo. He only goes from being physically to mentally lost to Katniss.

Katniss only potential response that could alter the course of the story would be for her to relapse into the unwilling, unhelpful spectator she began the film as. Mockingjay Part One has detailed her growth from a reluctant collaborator in the rebellion to a brave soldier prepared to act. This final moment only risks reversing all of that growth and momentum. Nothing else changes over the final twenty minutes of the film, leaving the movie to end with a whimper instead of a bang.

Mockingjay Part One is better than Harry Potter and the Deathly Hallows Part One, another film that attempted a similar division but ultimately felt pointless throughout its running time. However, standing on its own it is still flawed due a lack of any real conclusion. In a serialized medium like television, this sort of ending can function better. This movie is sold as a unique film and the next part is a year away; it does not hold up within that context.

That structural flaw is disappointing because the story that builds to it is so well told. Even with a noticeable lack of action, Mockingjay Part One is an engrossing two hours. Lawrence and his cast do so much right that it's easy to forgive the regrettable decision to divide the story over the course of a year. If Mockingjay Part Two is as well made as Part One, then they will combine to create an epic double feature. However, viewed on its own Part One can only be considered half of a great movie.

The Hunger Games: Mockingjay Part One is Half of a Great Movie