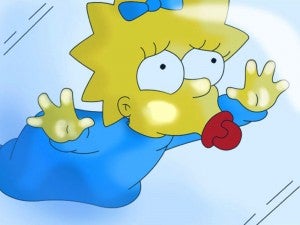 Apparently Bart really wasn't kidding when he wrote on that chalkboard that he wouldn't wait another 20 years to make a movie. The Simpsons may not be airing new episodes every Sunday at the moment, but that doesn't mean you'll have to wait until fall to see some new material. Fox has just released a 15-second teaser trailer for The Longest Daycare, a Simpsons animated short starring Maggie Simpson which will apparently be screened ahead of 3D showings of the studio's upcoming CG-animated summer tentpole Ice Age: Continental Drift, in theaters July 13. While short films are uncommon in today's market, they've been a staple of Pixar Animation for years, so it makes sense for Fox, who owns arguably the most valuable animation property of the last fifty years in The Simpsons, would look to exploit the model. You can see the teaser below.

The Simpsons Theatrical Short Will Head Up Ice Age 4