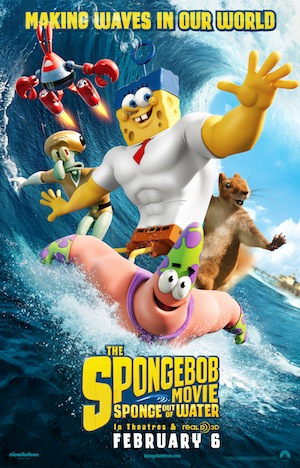 Paramount Pictures and Nickelodeon Pictures have released a new trailer for The SpongeBob Movie: Sponge Out of Water, the upcoming, CG-animated film based on the long-running, popular animated TV series.

To go with it, they've also released a new one-sheet poster, seen above.

In his second theatrical feature, SpongeBob goes on a quest to discover a stolen recipe that takes him to another dimension -- our world -- where he tangles with a pirate. The film will feature live action scenes directed by Mike Mitchell, which were shot on various locations in Savannah, Georgia and Tybee Island.

The SpongeBob Movie: Sponge Out of Water stars Tom Kenny, Clancy Brown and Antonio Banderas. The film will be in theaters on February 13.

The SpongeBob Movie: Sponge Out Of Water Second Trailer Released