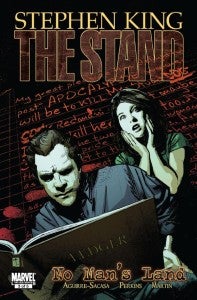 Well, that escalated quickly. In spite of an interview that ran this morning on MTV's website in which filmmaker Scott Cooper was talking about the challenges of adapting Stephen King's beloved epic The Stand and discussing the odds of bringing The Dark Knight Rises star Christian Bale on to star in the film, studio sources are now saying that the director has bailed on the project altogether over creative differences with Warner Bros., The Wrap reports. Cooper was the third filmmaker to be attached to the film; first David Yates left the project and then rumors almost immediately swirled that Ben Affleck was to direct and possibly star. Before anyone could even confirm that was true, the studio announced that Affleck had been moved off the project to work on Live By the Night and that Cooper would take over The Stand, which is a priority for the studio. Inspired perhaps by the hugely profitable TV adaptation of The Stand starring Gary Sinise, Molly Ringwald and others, the studio reportedly wants to steer the movie away from an R rating in the hopes of giving it broader box office appeal. Borys Kit of The Hollywood Reporter tweeted, "Depending on whom you talk to, the parting of ways was due to 1) "creative differences," 2) a differences in ratings: Cooper wanted to make an R-rated movie while the studio wants a more broad PG or PG-13 movie, and 3) the studio can't decide how many movies it wants." Cooper's next film, Out of the Furnace, opens on December 6 and stars Bale.