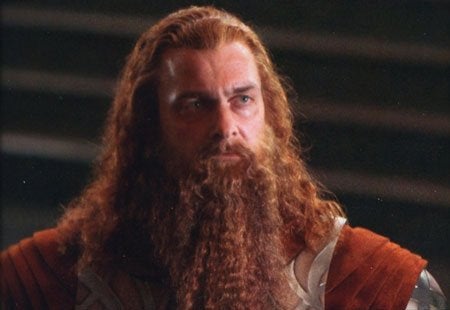 Ray Stephenson, star of explosion-friendly action films like Book of Eli and Punisher War Zone, appeared recently at a red carpet premiere for G.I. Joe: Retaliation, in which he plays Firefly, and (as one might expect) conversation turned to his next big project, Thor: The Dark World. "Asgard's under great threat, I mean the biggest threat it's ever had," Stephenson told Red Carpet News TV (via CBM). "The worlds have been turned upside down, the stakes are a lot higher, it's a lot grittier and darker. It's gonna be a lot of fun! I saw Christopher Eccleston on set two or three times. The man is just a construement sort of, malevolent, dark force. He's under so much ...make-up that took hours and hours [to apply]. It takes a lot, but he's bringing something very very dark and special to it. There's always potential [for Volstagg to show up in The Avengers 2]. There's always room for a big guy in the end." Leaving aside the implication that he obviously survives the upcoming film if he's talking about the next appearance, what do you think about seeing more of the Asgardians alongside Marvel's mightiest?

Thor: The Dark World Actor: My Character Could Show Up in Avengers 2